Whistle while you work 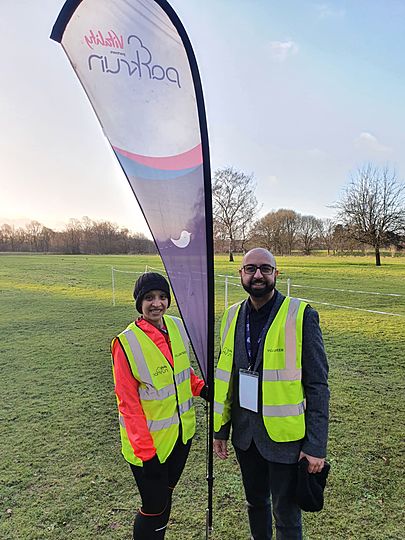 It was a morning of GoodGym firsts at Perry Hall parkrun. Firstly it was Bal's first good deed and first time doing pre event setup, but by no means the first time she has volunteered at parkrun. Well done getting started with GoodGym, go and give her a cheer to celebrate.

It was also Tousif's first community mission leading as a member of TaskForce, so he was leading in many senses as he had already set out the course in previous weeks. Well done on getting to the 10 deeds mark and stepping up, go and give him a cheer too.

Also, it was the first CM of February. Bal was doing setup in her running gear for the usual reason that she hoped to get her 5k in afterwards. Tousif was dressed in a full suit complete with trainers for the mud, as he had a busy day of conducting interviews at work straight after. Hence the whistle in the pun for our GG friends down south who will get the rhyming slang.

A lot of commitment on show, meaning in excess of 100 runners can get their Saturday started in the best way.