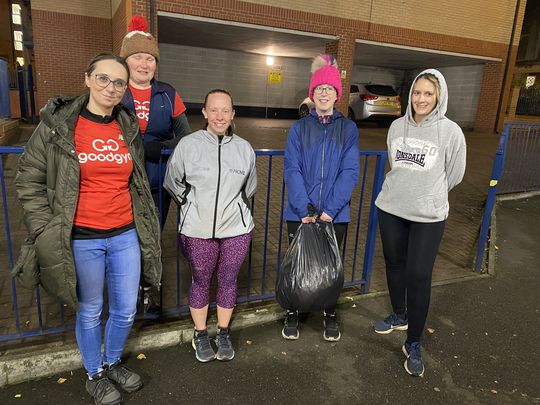 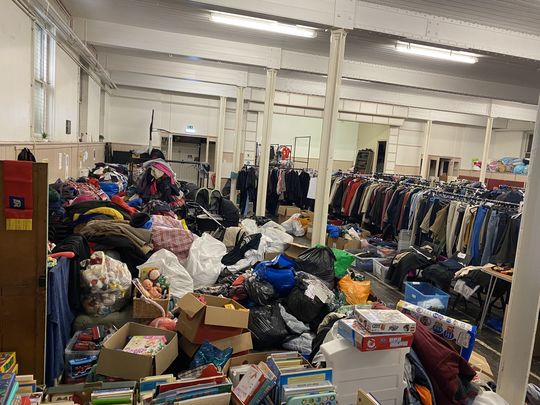 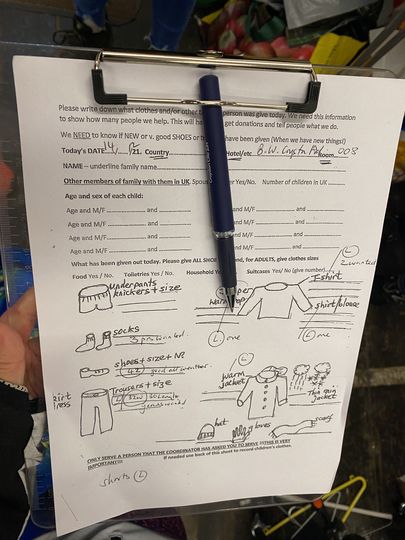 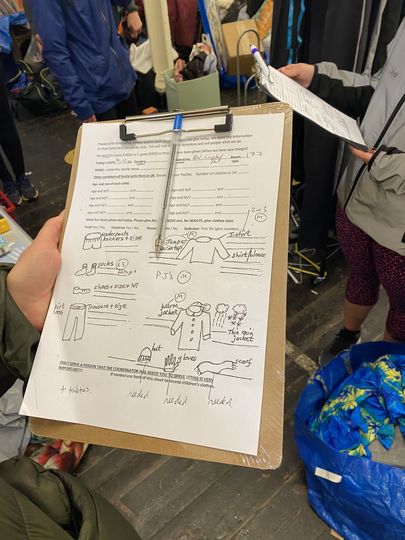 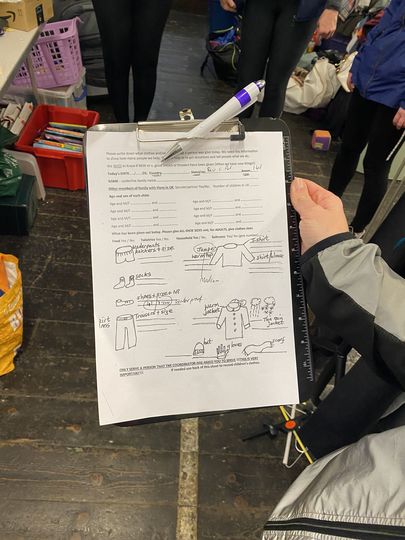 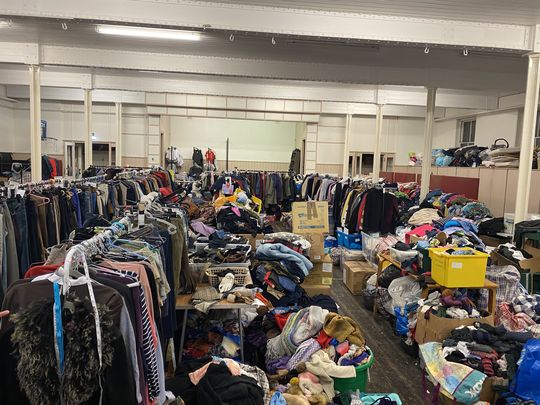 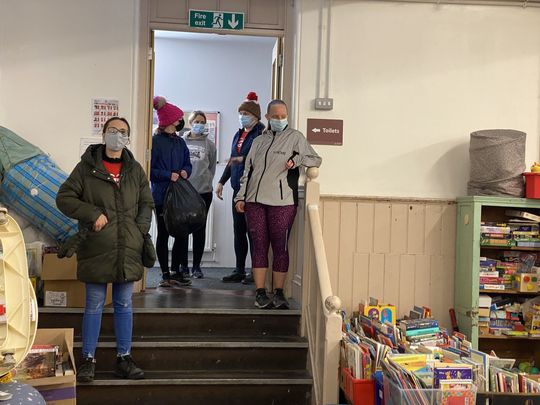 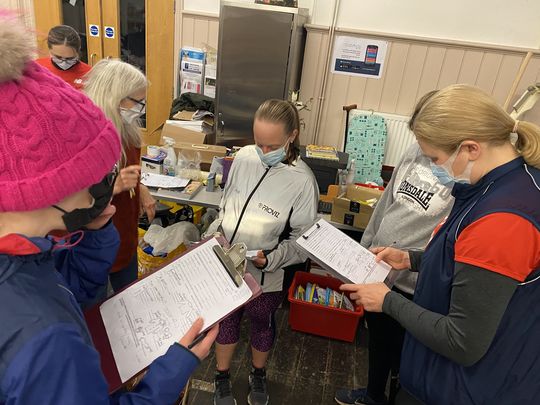 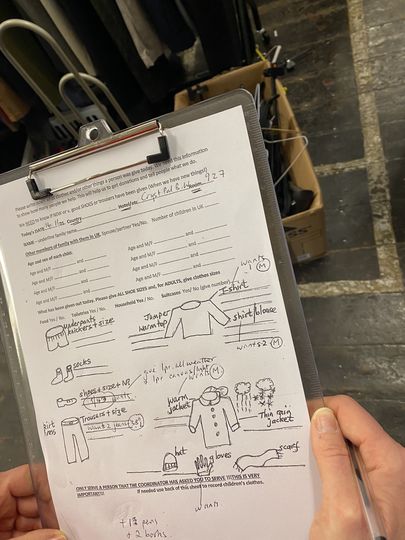 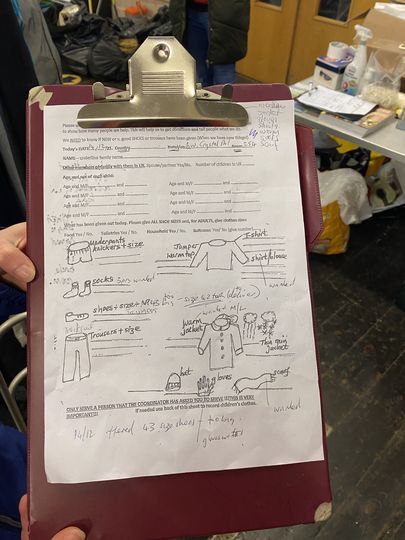 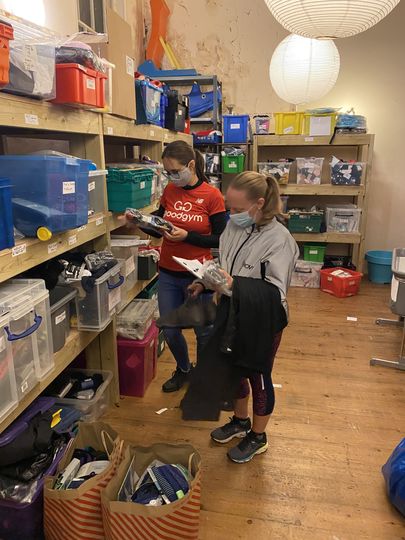 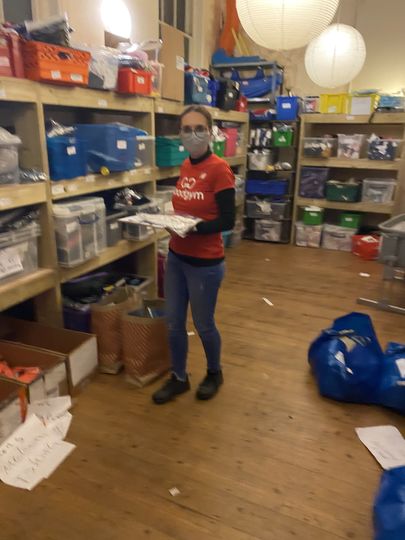 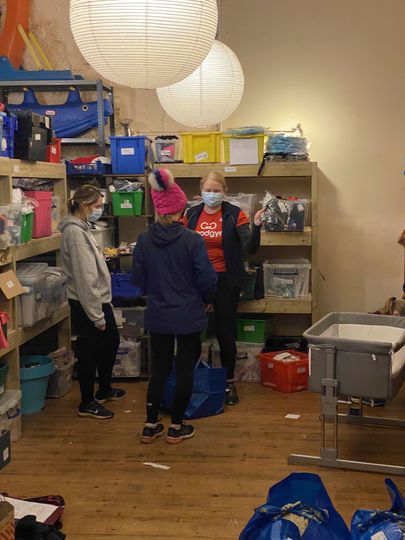 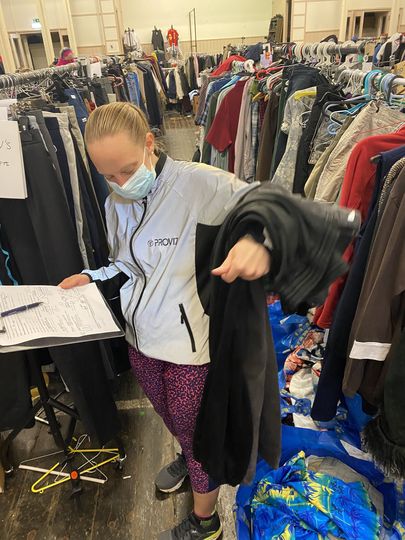 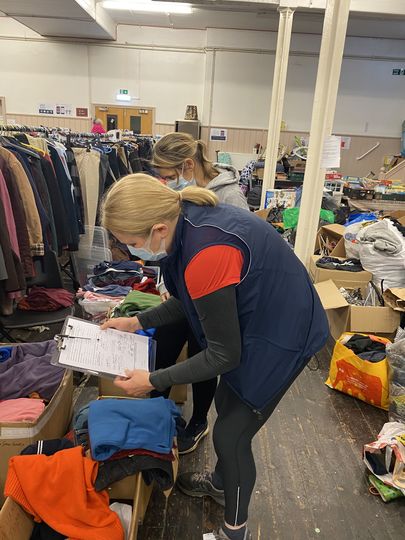 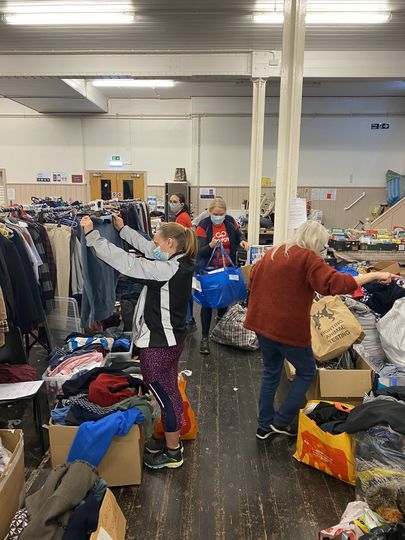 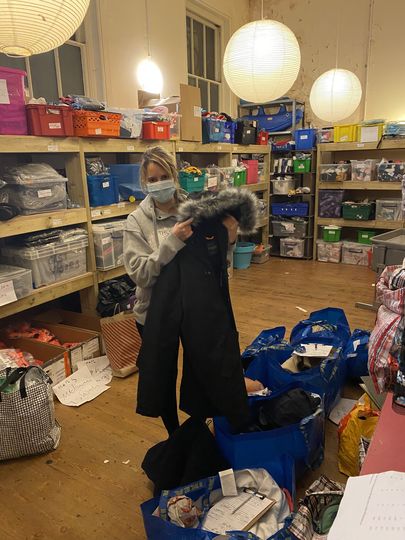 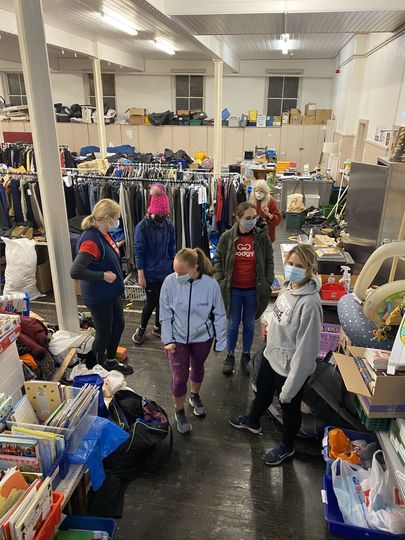 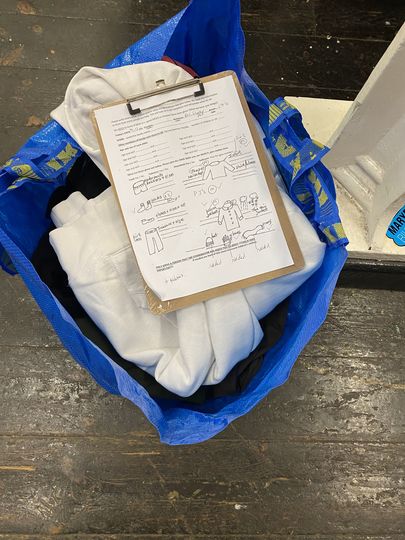 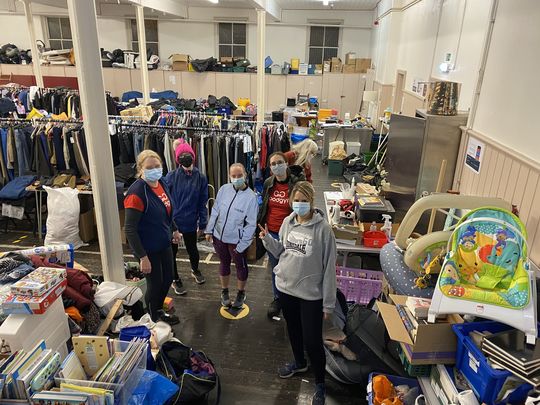 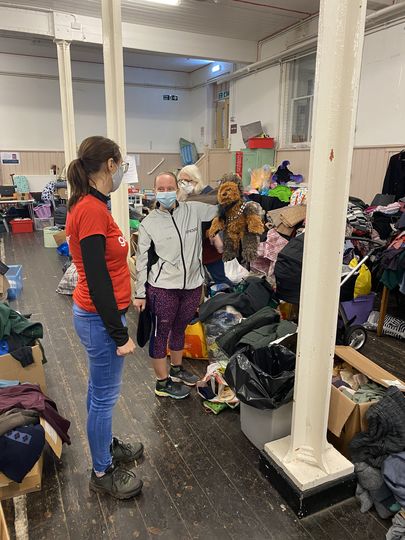 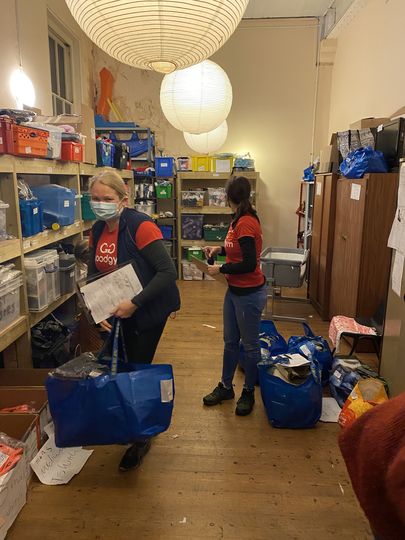 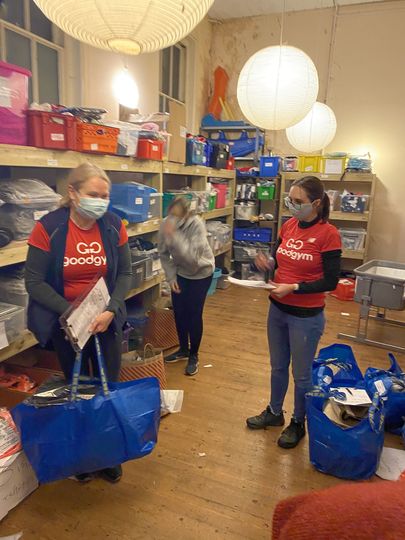 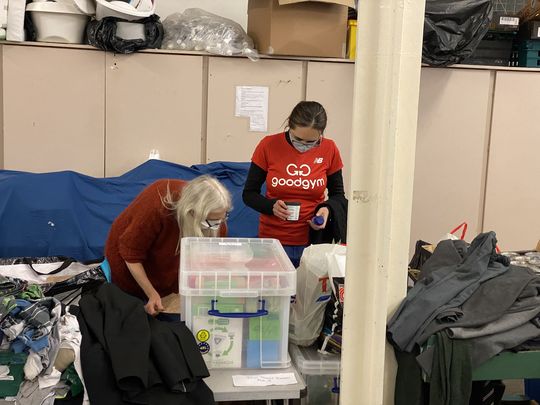 Last night we went back to help out at the Croydon Refugee Day Centre (CRDC), but instead of jogging there were took a nice stroll as a member of the group is currently injured and instead of letter her walk to the task by herself we walked with her.

When we arrived at the Centre Ros was there with her bag of donations, well done Ros nice to see someone else reads my run report last week. Ian was not with us this week but after reading the report last he dropped me an email commenting on how well the report captured what we did along with the work of Croydon Refugee Day Centre. Extra cheers for Ros and Ian.

This week were were given a clipboard with a list of items sent on a shopping spree, but before we head of Ivanka gave us a quick run though of where where we should look for the items.

For those who have seen supermarket sweep, its exactly like that without the trolleys and we were not being being timed. We completed all our list and had time to do some sorting and re-stack some of the clothes rails.

CRDC are always looking for volunteers so if you have some spare time one day do get in touch and I'll pass your details onto Ivanka.

CRDC are always looking for donations on behalf of the people they support, mens clothes are alway in demand if you have some unwanted clothes that is still wearable please remember CRDC. Below is a bit about the people CRDC helps put together by Ivanka.

First a little background info about the refugee ‘situation’. Where do refugees come from: Syria 27% (6.7million) Venezuela 16% 4.0
Afghanistan 11% 2.6 S. Sudan 9% 2.2 Myanmar 5% 1.1 Others 32% 7.9 73% of refugees are hosted in neighbouring countries and 86% refugees are hosted in developing countries. Top hosting countries: Turkey 3.7 million Colombia 1.7 Pakistan 1.4 Uganda 1.4 Germany 1.2 In Europe in yr ending June21: Germany 113,625 applied for asylum France 87,180 “ Spain 67,405 “ UK 37,235 “ When you arrive in UK you are called an Asylum Seeker (AS). You are put in a hostel but because of covid creating huge backlogs some AS are put in hotels – but even if the hotel is say 3* the service and food won’t be! Once you have had a first interview and you are told that you can be classified as an AS you get £8 a week per person. This is a new payment as AS historically never had to spend months or even a year or so in an asylum initial accommodation hostel/hotel. They would be moved into some sort of self-catering accommodation. Once they are moved into either a shared house (perhaps a mother and child sharing with another mother and child or several single adults sharing one house and sometimes rooms) or self-contained flat or house for most families the family must pay all food, clothing, school uniform, transport, phone and many small expenses out of £ 39 pw that each accepted AS will receive. After a second interview they may get Refugee status. This is when many can become homeless as they then have 28 days before they have to leave their Asylum accommodation. In that 28 days they need to get an NI Number, save for a deposit for a room, sign on for UC (takes 5 to 6 weeks but for a Refugee it takes longer as they cannot do everything online - Biometric card cannot be scanned onto UC site, find a job and get a bank account. Totally impossible. At time of writing it takes up to 16 weeks to acquire an NI Number. Having been round many banks with new Refugees getting a bank account takes months, except that recently we have found some internet only banks more approachable. Discrimination regarding accommodation slows finding accommodation unless a refugee can find friends of friends/own community to help with a room.

What do we do at Croydon Refugee Day Centre (CRDC)? We are currently helping between 150 and 180 people each week (Tuesday mornings) outside in the open giving out clothes and a little signposting. We deliver to others during the week. Most of these people are Asylum Seekers and have arrived in UK usually with only the clothes they are wearing. We also give clothes to various homeless people who are not Asylum Seekers or refugees. We give some household items such as bedding, pans, etc when we can. We receive donated goods mainly on a Monday morning, from 9am to 1pm.

We give basic food parcels and toiletries to people who are in self-catering accommodation and to local homeless men. Trying to source enough warm clothes such as waterproof anoraks, jumpers and waterproof shoes, especially for men, is extremely difficult and takes a lot of work - begging!

We have to sort and then throw out many of the clothes we are given as they are not suitable in some way. We do get a little money for each bag of rags. Sorting and then putting useful clothes in the correct place is an ongoing task. We always buy new underwear and try to give at least some new socks. We often have to buy gloves for all, and hats and scarves for men. We buy some new shoes and joggers when we have the money and can find cheap ones that are waterproof. Many of our AS will be ‘dispersed’ around the country at some stage, often to cheaper accommodation in the North of England, or Wales or Scotland.

People can wait many years for a decision regarding about being given Refugee status. So, during these years their lives are on hold, they cannot work nor, usually, study. There is an awful feeling of not knowing what will happen to one, that one’s life is in limbo and that one has no control. Many people suffer from depression. Plus, they think of family left behind or family who have been killed or are missing. Children are luckier. They may get into schools quickly or at least within 6 months. This opens up a whole new world to them. We have fantastic volunteers who help find schools, school uniforms and help get zip oyster cards for older school children. Getting free school meals is sometimes a big problem. Nothing is streamlined or easy.

Pre-Covid we existed as a drop-in centre serving hot meals and lots of vegetables and salads. We gave out some clothes, did some signposting and distributed food parcels. The Centre was a buzz of happy conversation, providing a friendly place where new and old Asylum Seekers would meet for free and get to know people from all countries and the UK for support and friendship. This seems like a distant dream. People need friendship and kind words as much as clothes but providing the former is rarely possible because of covid restrictions.

Today is our Birthday