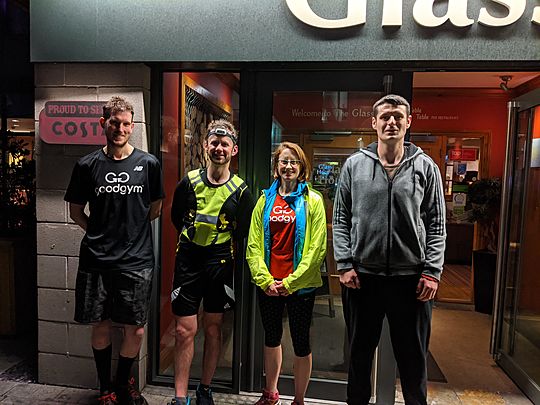 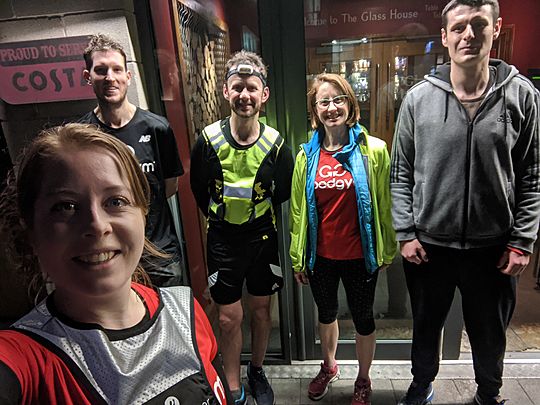 For the first run of the year and the first of the decade we welcomed two new runners to our group! Welcome Brent and Kieran great to have you along on the run! Let's give them a cheer! Tonight was also exactly one year since Clair joined GoodGym Barnsley so we marked her anniversary with a lovely warm-up squat! Give Clair a cheer here.

We kicked off the year with a visit to one of our regulars, Gordon at the Carer's garden! It is always an exciting and unknown prospect running up t'hill there, as no visit or task is ever the same! Gordon is always happy to see us and happy for the company and tonight he started by telling us he had one BIG job for us to do! As there was six of us and some tall chaps in the group, I was hoping for a sweat-inducing outdoorsy task of moving things (Gordon loves moving things!) but no, Gordon had other plans! Pointing at a small kitchen cabinet, Gordon explained the big job was to move the plate out of the cupboard into another a few feet away. Then once done, for us to pull the cabinet out two feet from the wall. Mairead, Clair and Kieran got to work on the big job whilst James and Brent headed outside to complete the smaller task of moving a pallet from one end of the garden to the other and placing a large plastic water container on top of it. Once back inside, with the big job finished in less than 10 minutes there really wasn't anything else we could do or persuade Gordon to let us help him with!

Leaving a task early could only mean one thing... more running! Yay! So we headed off on an extended route back via some hills and underpasses. First up was a Strava segment on Windermere Road with a 6.4% gradient - it's a steepy! On route back we also stopped at town end roundabout underpass and did a quick sprint parlauf session to get the heart-rate up for the rest of the run back.

Finally back at base, we did some great stretching, chatted about the upcoming year and said our goodbyes! Another good session - I didn't realise how much I missed leading GoodGym! Thanks for having me! :-)

Lovely having you back Grace

Grace Feeney
Ex-trainer for Barnsley. Goodgym has helped me improve my running and learn more about the local community.