13 runners ran have an amazing time in Swindon. 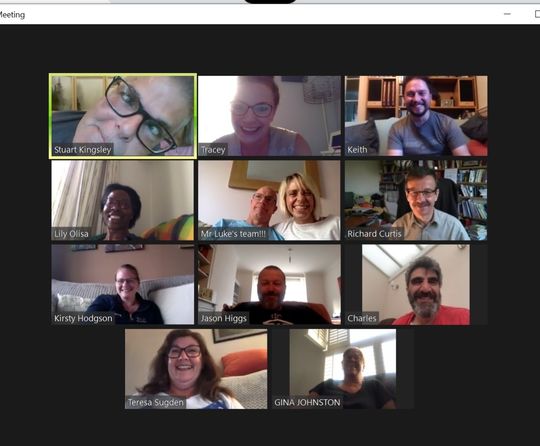 Once again we put on our thinking caps instead of our trainers on a Tuesday evening and had yet another quiz. Stuart upped his game this week and hosted a 60-question Movies Quiz. Although Charles was on time this week, he was yet again sent to the Headmaster for a pigeon incident. Not quite so random this time, the questions were all ‘movies’ related and to add a bit of spice this week we had a joker round. Only Tracey and Gina went for the quotes round (which turned out to be the easiest) and as for the rest, to quote from Indiana Jones and The Last Crusade, they chose unwisely!

The questions were coming thick and fast, and proved quite enjoyable judging by the squeals of delight from Tracey and Kirsty every time a Top Gun or Dirty Dancing question came up. A few groans from those who still haven’t seen The Shawshank Redemption – do you not know me by now? My favourite was the Dead or Alive round, which proved that when you’re dead, people don’t necessarily know!

We were again joined by Keith, who was immediately odds on favourite with the bookies after his last quiz win. The bookies were right, and although most people’s scores were in the mid 30’s to low 40’s, Keith bossed it with an impressive 50. As promised, the first prize (a bottle of Rothschild Champagne) was duly delivered to his door the next day. He answered the door very quickly, which was good because I’m sure I saw Kirsty, Tracey and Teresa hiding behind the bushes in next-door’s garden!

So, well done everyone, and we all look forward to entertainment provided by Ashleigh next week.

Great quiz - I just need to watch a few more films!!! 😂 Thanks Stuart!

Great report and an excellent quiz as always Stuart 👏👏