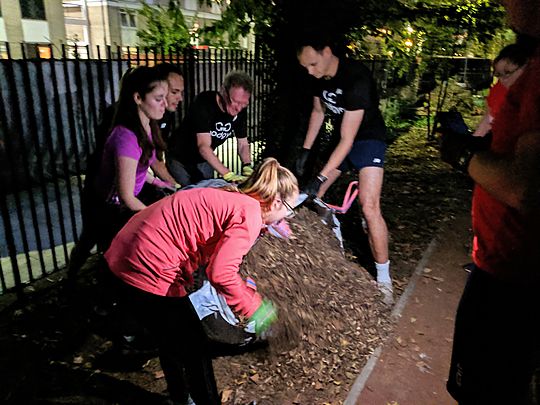 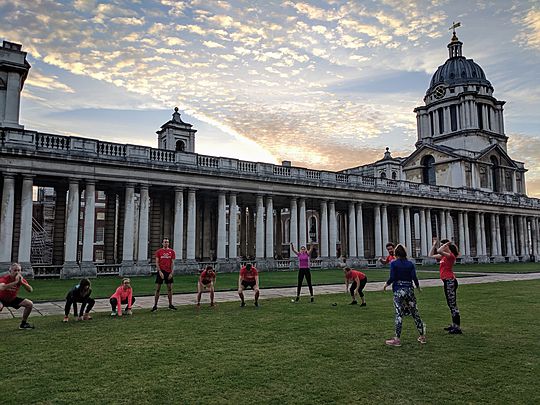 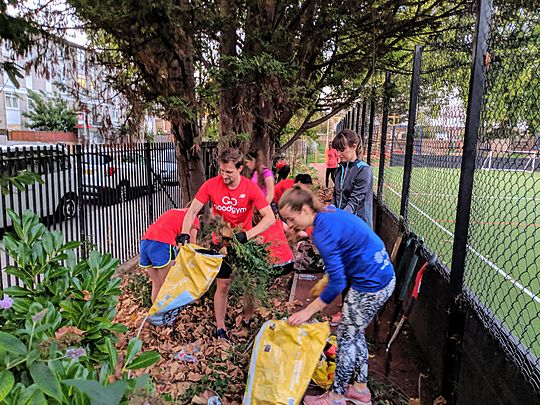 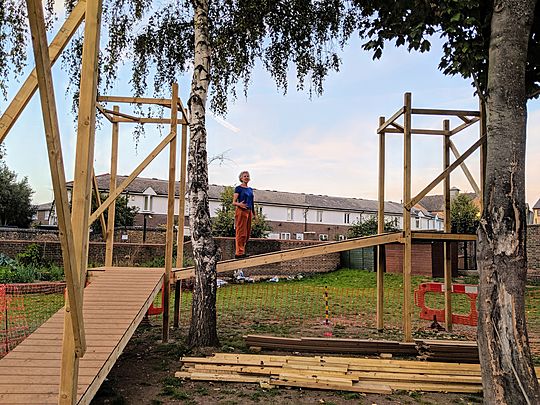 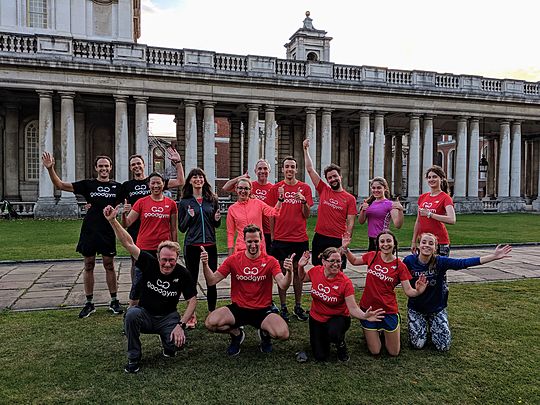 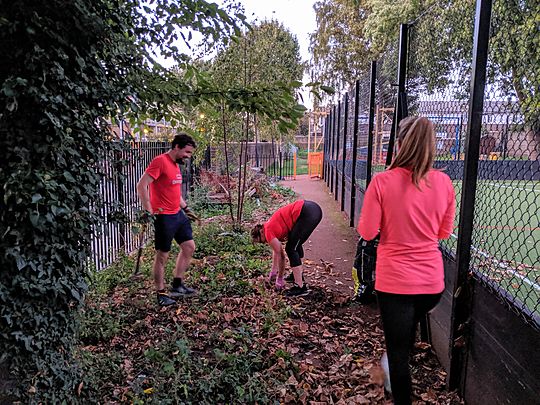 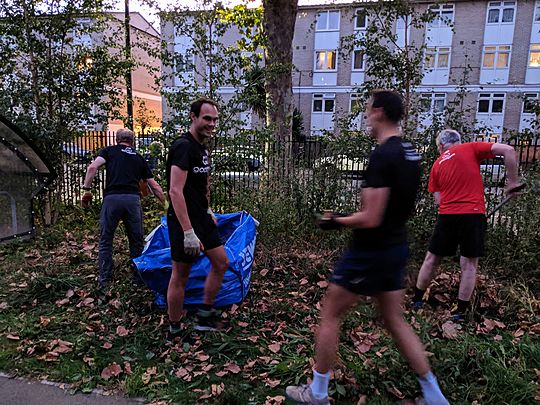 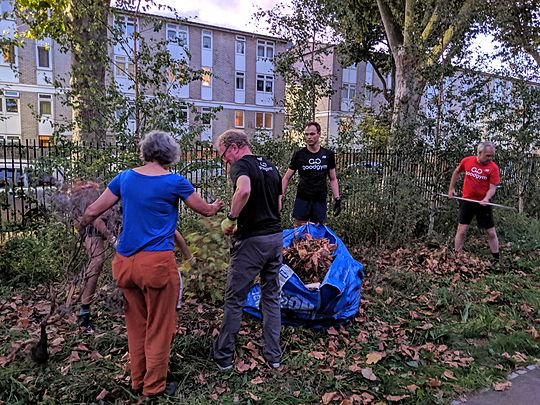 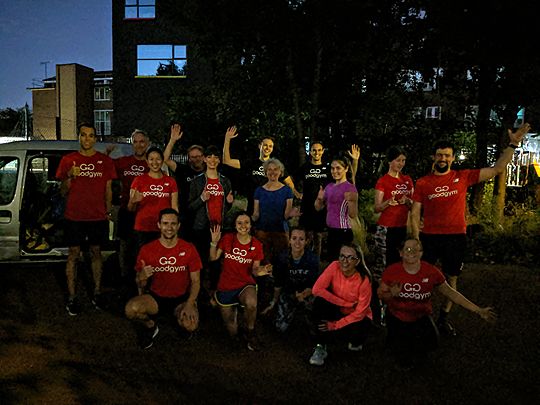 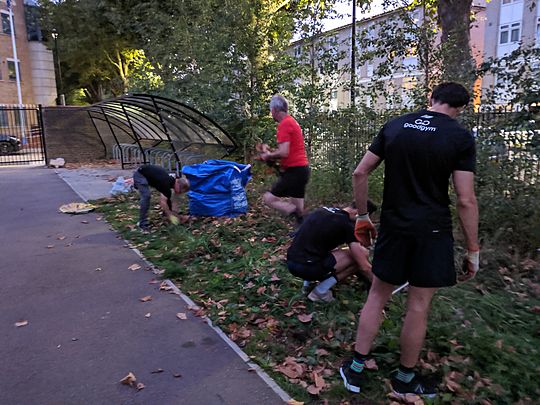 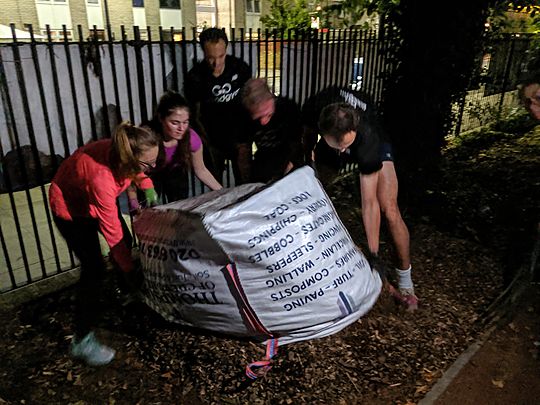 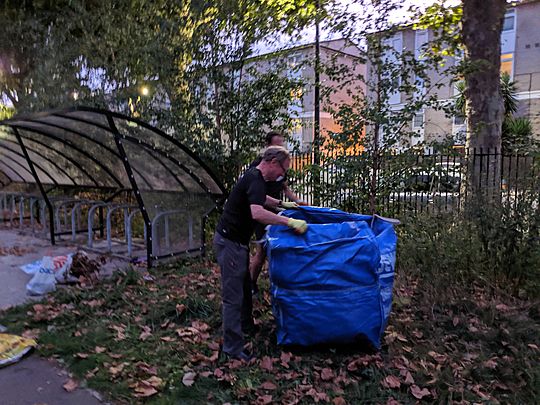 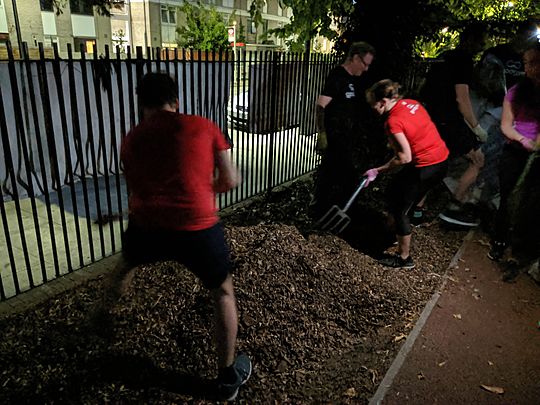 16 runners ran 3k to help tidy up the garden at St Lukes school!

Another successful evening in the GoodGym bank! Wednesday's come around quick and before we know it we've done another good deed woohoo!

The evening began with a lush sunset over Greenwich as we made our way to the foot tunnel. News of a Strava segment from one end of the tunnel to the other meant there were a few faster runs through there than usual... if you're wondering the segment is named "Foot Tunnel Torment". Annoyingly because of GPS issues that tend to come with tunnels, the CR is 2 seconds :|

We arrived in Island Gardens and finished off the rest of the run to the school. Myra was already waiting for us with a van full of tools and bags ready to go. But first we checked on our treehouse progress! It looked awesome! Concrete had been put in the ground to hold the towers in place. And some cool ramps had been built already, so it was taking shape very nicely. Those kids are going to have so much fun playing on that when it's all done!

After getting back on track, our main task was to clear as many weeds and leaves as possible from next to the main walkway and then lay some woodchip over the top if there was time. Everyone grabbed some gloves, some squeezed their adult hands into a pair of kids gloves, however some people found that the kids ones fitted quite literally like a glove!

Then began the weeding frenzy! Filling bags with nettles, twigs and leaves and piling it all behind the bike sheds out of sight of the parents :)

After 20 minutes, we had cleared enough to start laying down the woodchip. The huge heavy bag was hauled over, emptied out and raked through nice and evenly. Our time was up!.... BUT.... we still had one bag of woodchip to put down and if we all pitched in together we could do it in a few short minutes and that's just what we did... NICE WORK! GO TEAM!!

It was pretty dark by this point, we attempted a photo and then head back through the tunnel to the uni and stretched! NIIIIICCEEEE!!

Here is the community mission at Charlton House I was talking about at the food kitchen. Prepping food, serving food and clearing up. Apparently they need more help in the afternoon and evening to clear up so if you can lend a hand that would be wicked!!

Next week we are heading to Vanbrugh Pits for some conservation work! It is also the week that GoodGym turns 10 years old so there are lots of celebrations happening in which case let's try and go for pizza after the group run, I'll make sure it's booked this time ;)

Keep an eye out for some community missions all over for the GoodGym Super Saturday. More information here. I'll let you know more next week.

Cleaning the playground at The Bridge Community Centre!