7 runners ran on a training session in Greenwich. 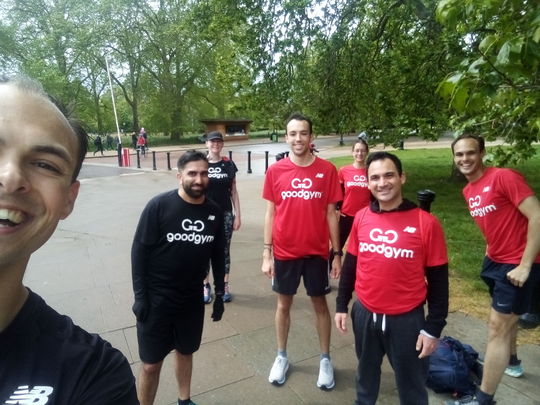 And I'm doing so because I want to be honest. Honest with you, my dear reader. It's an unwritten (ironic?) contract between writer and reader, isn't it. You've taken the time to read and the least you deserve is absolute, complete, and unconditional honesty.

So here's me admitting to you - admitting that I woke up feeling awful - awful because I'd only completed a measly 7 GoodGym missions yesterday :( That's right, only 7 over 8 hours :(

How could I be so selfish with my weekend's time? Could I really call myself a GoodGymer? Surely I should simply burn my red t-shirt? I woke up in this existential crisis of conscience, dear reader, and I wondered, and wondered and wondered - would I ever feel good enough for GoodGym again?

Okay, fine, maybe I didn't. And maybe I didn't do any GoodGym missions this weekend. But don't tell anyone, okay? Especially as I did spend this morning with GoodGym friends from across our wonderful city.

We convened in the lovely Green Park. Joining the brother, Steve, and I, were the awesome Daniele, Jatin, Jenny, Laura, and Tom. What a pleasure it is to spend time with friendly, smiley, and super-interesting people.

Following some athletic limbering up in front of the park's Sunday morning strollers and coffee-sippers, we shot down the Mall, up across to the Embankment, over and past the House of Parliament, and back to Green Park. Upon our return, we found a spot, pumped up the boombox's speakers, and got to some core-boosting bodyweight exercises. A few sips of water later and we shot off for our morning's second stint of jaunting, taking in a lovely (and rain spotted) loop of Hyde Park.

Nearly two hours passed by in conversation and laughter - thank you to this lovely group for making the morning rather special.

Thanks Alex! Really loved this morning's session. Looking forward to the next one already :)

Thanks guys, lovely to see you both, catch you soon :)