13 runners ran 5.0km to help the Friends of Cator and Alexandra Parks in Bromley. 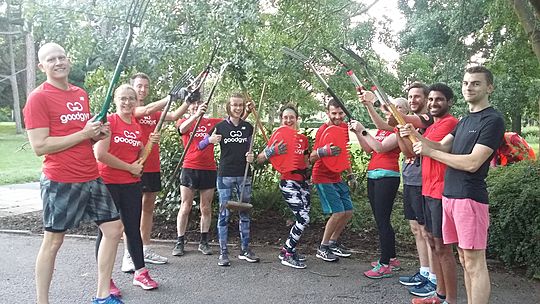 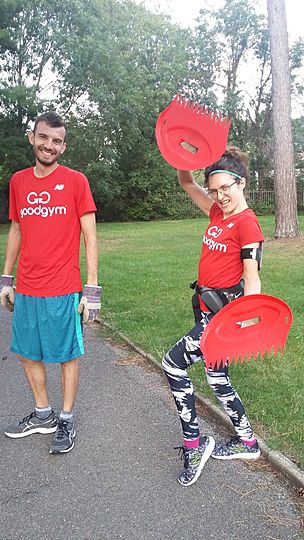 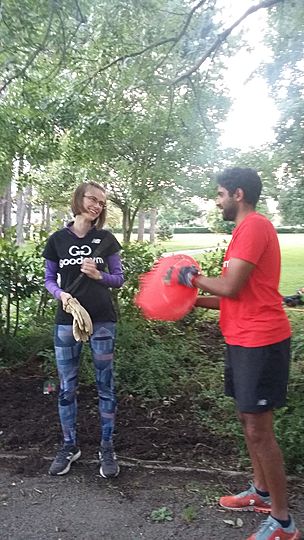 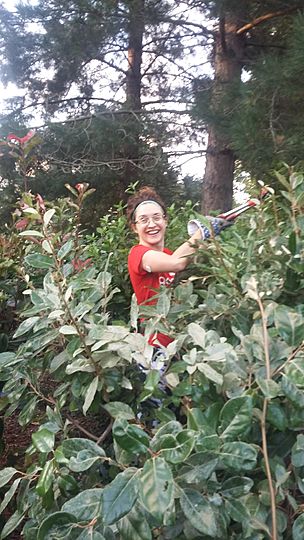 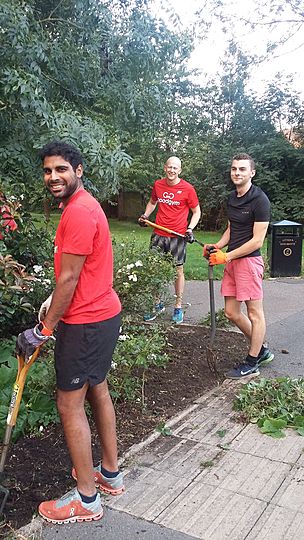 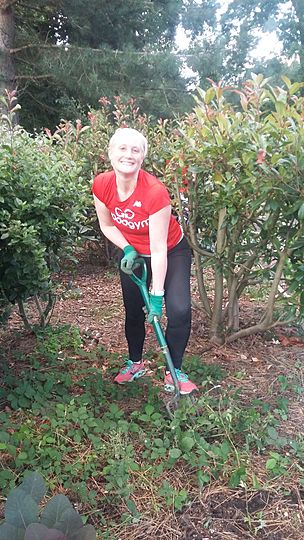 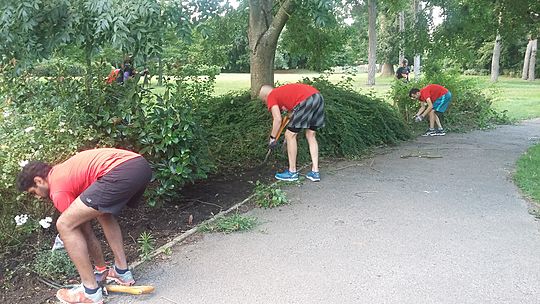 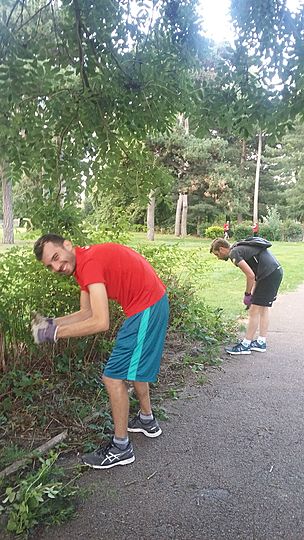 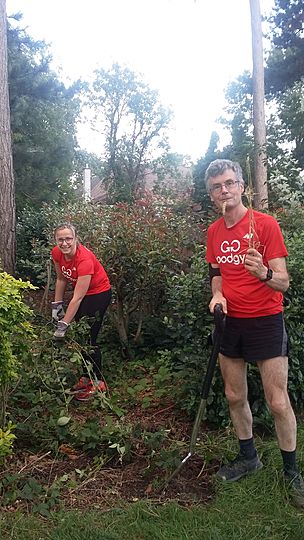 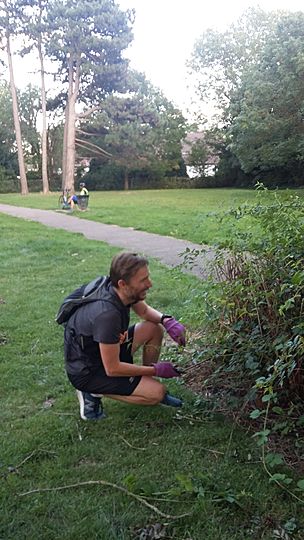 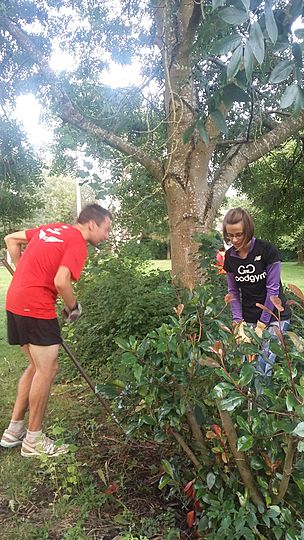 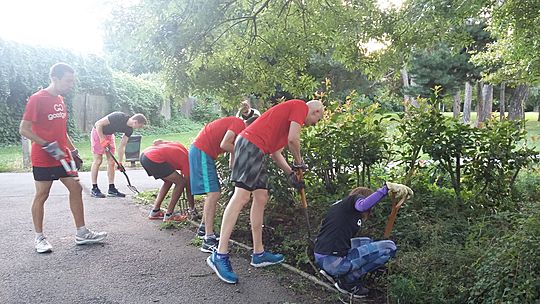 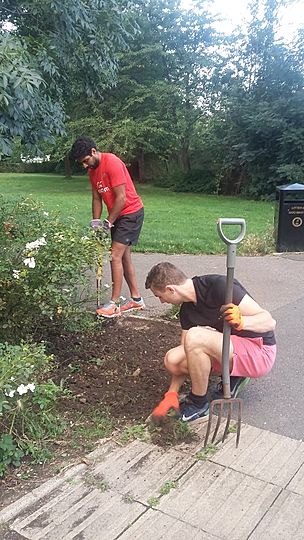 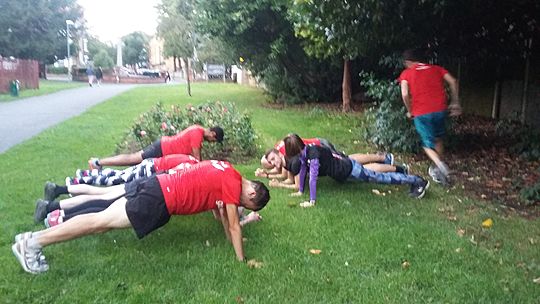 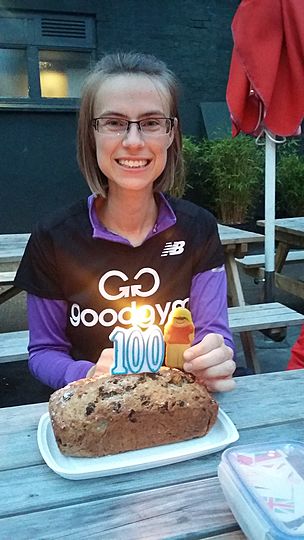 Twelve terrific runners made the most of a balmy summer evening to head to Cator Park to help the wonderful Friends of Cator and Alexandra Parks.

A huge Bromley welcome to Gary who joined us for his first foray in GoodGym, and massive congratulations to Hannah who celebrated her 100th good deed tonight, honoured with a slightly ropey pun... Helena's suggestion of Cator-aid would have been the undisputed winner if not for the special occasion.

We popped over to Crystal Palace Park for a quick warm-up, the runners splitting into 2 teams for a 'flip the cones' relay race, before heading off through Penge to Cator Park. We were welcomed by Millie, Siobhan and Penny and given our list of tasks for the evening, along with a magnificent selection of gloves and tools to work with. We soon set to work cutting back the dreaded brambles and wayward shrubs, and giving the beds a good tidy-up. A vigilant Mark spotted some courgettes growing in one bed, not your usual park find! The big red 'hands' went down a treat, with Georgina modeling them with some panache.

//Watch out for the big red ali-cator!

The mosquitoes were unfortunately out in force so there was much arm waving and leg slapping to try to ward off the blighters. After we had created several satisfyingly large mounds of cuttings with the aid of the big red 'hands', wielded with panache by Georgina, we downed tools, but not before giving Hannah a guard of honour, cunningly creating a '100' with the aid of the 'hands' and a broom. Well done everyone!

Cake was calling so we set off back to our start point, but not before a sideways diversion into another of Penge's green spaces for a mini strength session. The plank caterpillar was a good idea in theory but who put those rose bushes there?! A few rose bushes weren't going to put off the resourceful runners though, who created a new game of plank roundabout. The arms had been given a good workout with the task and the plank, so I decided it was the turn of the legs, with everyone's favourite Moby song.

//Did somebody say cake?

After what seemed like a never-ending squat-athon, we headed back to the Bridge House for not one, not two, but THREE celebratory sweet treats to enjoy. My effort of shop-bought gingerbread men (with Blue Peter-esque red t-shirts) paled into insignificance when compared with the amazing banana and chai cake whipped up by our very own masterchef Bradley, and some fabulous sticky ginger cake lovingly baked by the lady of the moment, Hannah. What a great end to the night!

Next week we return to the Living Well foodbank, which is always a popular task.

Don't forget to enter the ballot for the £10 community places in next year's Big Half on Sunday 1st March, entries close on Friday 23rd August. Email bighalf@goodgym.org if you fancy challenging yourself to a half marathon around the streets of London.

A little closer to our Bromley home is the Conquer Crystal Palace half marathon on Saturday 7th September, which also has 5km, 10km and 15km options. Check it out here

I’m grinning from ear to ear, it sounds like a wonderful evening! Congratulations Hannah and well done to our bakers!

You're being very kind with 'panache' Louise...