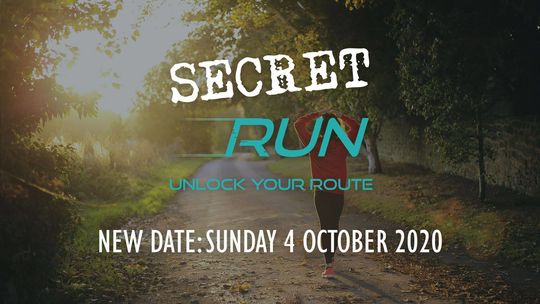 No crowds, no stress. Stay safe.

Secret run is described as "a fun, safe and secret running adventure where you are in control of your route" and is coming to Bath on October 4th.

Secret Run have conceived an event which drops all the usual parameters of a regular running race in order to provide a safe, socially distanced experience - with some fun along the way.

For maximum social distancing, the event begins from a number of different start points around the city (they'll let you know yours on the day!), and involves competitors navigating themselves around the city between a series of checkpoints, finding clues to the next waypoint as you go.

There are a selection of different (and approximate) distance options:

The organisers are deliberately sketchy on much more detailed information than that - it wouldn't be a secret otherwise, would it? Although their Facebook page has been keeping up an occasional feed of logistical information.

On paper it reads like a sort of cross between basic-level orienteering, and the plot of the first half of Die Hard With a Vengeance!

This is not an official statement, but it sounds like the organisers are doing all they can to make this as safe an experience as can be in these difficult times.

They say they're monitoring local Covid conditions and announcements, and have in fact already moved this event from an earlier date in August on that basis.

It's not designed as a group experience, so barring coincidence we're unlikely to end up running as any kind of GoodGym group. Everyone will likely be finding their own way and doing their own navigation for this event.

This event is organised by your Taskforce, a group of experienced GoodGym members in your area, they are not responsible for your safety. You should feel confident to participate in the event as it is described and you do so at your own risk.