The exceptional women of GoodGym

To mark International Women's Day, Mridula took a moment at the social last night in Greenwich to celebrate all of the exceptional women runners she's met on her GoodGym journey and beyond. She's kindly written up her speech in case you couldn't make it.

On International Women’s Day, looking back, this time last year I was on my 10th or 11th run with GoodGym Greenwich. We named our favourite woman on that run, and now over 100 missions later, so many things have changed, and so many things haven’t.

We’ve seen a tremendous amount of change, especially in the arena of progressiveness for women. In the news, we’ve had brave women (and men) come forward to challenge the inappropriate behaviour they’ve experienced in the company of people who abuse their position of power, and finally the world is listening to this change.

So much of my life has been spent in very male dominated environments where strong female role models have been few and far between.

People are starting to have open conversations about the gender inequality that has existed for far too long and the world has taken one step forward towards becoming a slightly more equitable place. It does sometimes make me sad that it has taken this long to get here. But this is also why I’ve been tremendously grateful to have GoodGym as such a big part of my day-to-day. 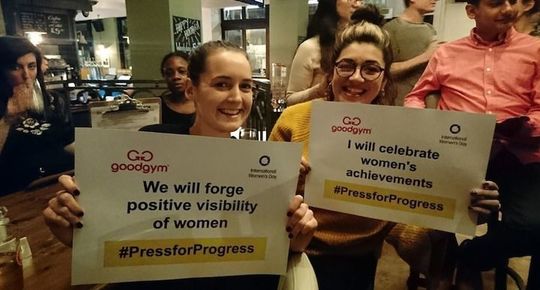 So much of my life has been spent in very male dominated environments where strong female role models have been few and far between. Even when I started taking part in sport – only three years ago – there were very few women around.

GoodGym is one place that has not only defied this but is also leading the way. To throw out some statistics (thanks to Axel for this), we currently have an almost equal number of trainers who are women and men. The ratio is similar too in head office where it is 50-50. And of our wonderful volunteers, women make up a whopping 75%!

GoodGym is one place that has not only defied this but is also leading the way.

To highlight just how exceptional the women at GoodGym are, I wanted to embarrass a couple of women who I’ve had the pleasure of meeting.

There are also multiple mums who are part of our group, who prove on a daily basis, that women who hold the busiest job in the world, can still find the time to get out and give their workout’s purpose.

No organisation has inspired me to continue taking part in sport as much as GoodGym – its progressiveness and ethos has played a big part in that. This message is constantly and continuously demonstrated in no small part, to all the wonderful and inspiring women I’ve met along the way.