"This is what GoodGym is all about"

Andrew Robson has been running with GoodGym since May 2018. Here he talks about how being a part of GoodGym Newcastle has helped him to overcome anxiety and make new friends.

Before GoodGym I was shy. Cripplingly shy.

I struggled to maintain friendships because I was too anxious to do things I hadn’t done before. ‘We’re going for lunch; do you want to come?’ I couldn’t. I wanted to but I couldn’t. “Pub?” No chance.

Shopping was difficult too. The only shops I could go to were ones with self-service machines but that wasn’t the only problem. If there was someone looking at the same shelf I wanted something from, I would wait for them to leave rather than reach past or say ‘excuse me’. If they didn’t leave, I would just leave without buying anything.

Food was by far the worst. Ordering at restaurants, at bakeries or delis were all far beyond my abilities. A place like Subway would strike fear in me, there’s just so many questions, so much interaction. 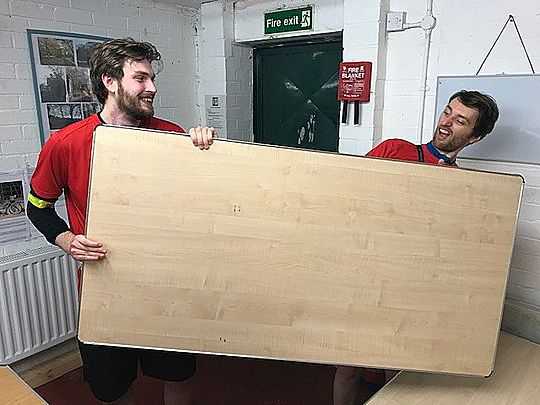 Haircuts took me months to build up the confidence to get.

Fast forward nearly a year and I just had two of the best days I have ever had but they were packed with previously petrifying tasks that I couldn’t have achieved without the excellent people at GoodGym. Andrew of early 2018 would not believe what GoodGym helped him achieve. Here’s what happened and how GoodGym helped me every step of the way.

Andrew of early 2018 would not believe what GoodGym helped him achieve.

The first event in the two fantastic days was a 10k run. I signed up for it because it was posted on Facebook by GoodGymers. Usually I would just ignore this. I’d think of all the difficult interactions it would involve but this time I took the plunge. I signed up because it meant seeing and running with the inspirational people I’d met on group runs over the past year, to me that was worth battling the awkward interactions.

The first of these previously awkward tasks was going to the registration desk of the run– no self-serve here. After a year of GoodGyming I didn’t even register this as a task I couldn’t have previously done, every week I sign the register for the group run, this is an interaction I’ve mastered.

After the run all the people from GoodGym met up for a photo opportunity. I’d like to think that I’d always have taken part in that, but I’d probably have left straight after the run. Photos are a big part of what I now enjoy about GoodGym. When I first started, I was very reserved in the photos, but I enjoyed how out there other people were prepared to be. Now a photo opportunity is something I look forward to. 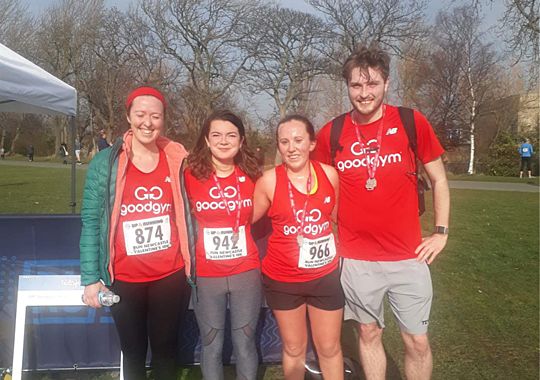 Just after the photo I got the question I used to dread. ‘We’re going for lunch; do you want to come?’. I would love to. I feel we have a strong sense of community at GoodGym in Newcastle, I feel happy when I’m around these people and this makes me more confident and I know they are there to help if anything did go wrong.

Here’s the first time I struggled. I had to order. I’m much better at ordering now but I’m still not confident enough to order things that, to me, sound ridiculous. I just don’t want to say ‘can I have the scrummy scraps, please!’ I’m just not there yet. Although, I am now confident enough to explain this. I was asked what I was going to have by a fellow GoodGymer, I explained I was struggling to find something I felt comfortable ordering. Heart-warmingly, I wasn’t met with a confused look. I was met with solutions; ‘Just say the scraps and point!’ This I can do. There was no judgement that I wasn’t acting normally, there was just an overwhelming want to help me. This is what GoodGym is all about. 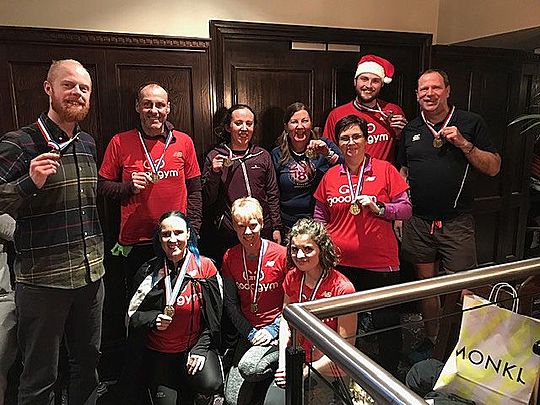 I wasn’t met with a confused look. I was met with solutions

The run was on a Sunday, which meant that our next group run was the next day. This meant I got to say a goodbye that I had never got to say to someone from GoodGym before: ‘See you tomorrow!’

Walking home, another GoodGym runner drove past me. He honked his horn and waved. It really cemented how wide of a community GoodGym is in Newcastle. Still feeling good about my achievements that day I stopped at the Sunday market to order more food. Yes, I know I was walking home from lunch and I didn’t need to stop to buy food but this story is about overcoming shyness not gluttony. No self-serves here either but that’s not a problem anymore. Almost unbelievably, I bumped into another GoodGym runner here and we chatted while my order was prepared. It felt normal. I felt normal. The next day was the group run. When I first started at GoodGym I would try and show up just before the run started. This way I would avoid the anxiety I would feel about arriving alone and standing alone – it’s not like this ever would happen, by the way. There was always someone coming over to talk, I was rarely alone, but I still worried. Now I have started to get to the group runs earlier, so I get to spend more time with everyone.

It started with the type of warm up that used to give me anxiety. We had to pair up, I’m sure every has felt anxiety about this before, but I found a partner. Then we had to run around and on the shout of a letter from the run leader find our partner and shout a fruit or vegetable that starts with that letter. Whoever is the first in the pair to say a valid answer wins and the loser had to do squats. Less than 24 hours ago I was panicking about saying ‘scrummy scraps’ but now I’m shouting ‘MELON!’ at somebody in the street. Melon was the only fruit or vegetable I could think of in the entire warm up, I had to resort to hiding because I couldn’t squat anymore.

The group run was as excellent as it always is. I spent a lot of time talking to a first time GoodGymer. I remember my first run and how appreciative I was that somebody, in the famous red shirt, ran with me and explained how everything worked. This made me feel at home instantly and since then I’ve always wanted to talk to people doing their first deed. 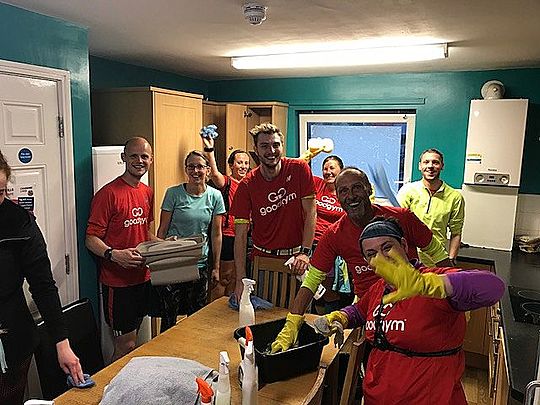 After the run we went to the pub. This is a tradition that the taskforce have done very well in organising every week. During the earlier weeks of GoodGym Newcastle we go to socials every so often but not every week. I would always skip these, it was too hard. One night, I was asked by the run leader if I was coming along. I said ‘it wasn’t for me’. She didn’t ask why not, she understood. It might sound like it was an easy thing for me to do. Just go. What’s the worst the could happen? But things that are easy for one person are difficult for others. I appreciate that she implicitly understood this. I managed to convince myself to go that night and I have been to social since. They are a key reason why I look forward to Mondays.

This time the location we’d arranged to go to seemed busier than usual. This used to make me anxious. Uncertainty about seats makes anxious. Tonight I wasn’t anxious.

It turns out it was busy because it was a quiz night. I love quizzes. I have never been to a quiz night. They seemed an impossibly difficult task for me a few years ago. I have to go to a place I don’t know, find a seat, order something and find out how to join the quiz. It’s just about the only thing worse than trying to get a sandwich at Subway in terms of anxiety. 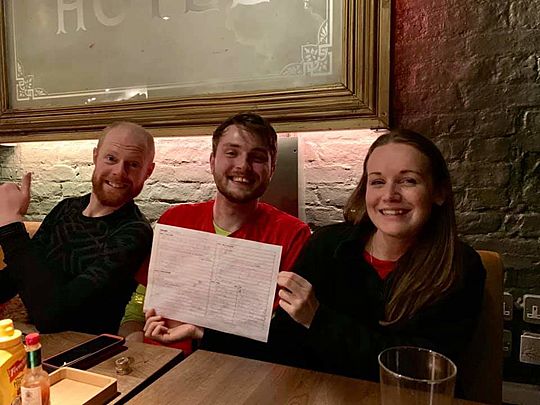 I ordered a drink at the bar without even a hint of anxiety and re-joined the group ready for the quiz. Everything came together perfectly that night. Everyone there seemed to know an answer that nobody else knew. I managed to answer a music question. We had the lyrics to a song but they had been obfuscated, it wasn’t easy. We passed it around but nobody knew. Then it hit me (baby one more time). It was Britney. The only way I could convince people that I was sure I had the answer was to sing. If I thought shouting ‘Melon’ in the street was as out there I would be that day I was wrong. Less than 3 hours later I sang Britney Spears 1998 classic Baby One More Time.

We came joint first in the quiz and definitely didn’t lose a tie break question meaning we actually came second.

I will never forget those two days. They would never have been possible without everything GoodGym has done for me.