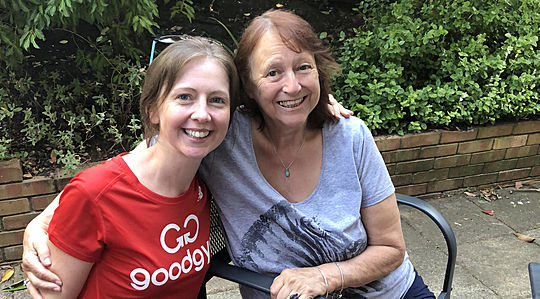 Delia, a GoodGym coach, congratulates everyone for reaching 100,000 deeds

Delia is a GoodGym Coach in Kingston. For the last few weeks, Nicky has been running to visit her each week for a social visit.

When we told her that GoodGym runners had completed 100,000 good deeds, Delia wanted to share some words of encouragement for every runner involved.

Initially the idea of having a sweaty runner turn up at her house didn’t sound that appealing but after a few visits, Delia and Nicky have already struck up a pretty special friendship.

"She's wonderful, she's my best mate, it's the best thing I've ever done. I'm so pleased she’s visiting. She doesn't rush off and always stays long enough for me to enjoy her company. We've talked about every single thing imaginable we're so alike."

The best thing I’ve ever done

Now she wants to tell everyone about how much she loves her visits from Nicky.

"I keep telling people how wonderful it is, I'd stand up in front of a room of people and say if you live on your own and if you have someone coming in who's well matched, it will be wonderful, you'll have a friend….”

For Delia being introduced to Nicky through GoodGym was a game changer, because she wasn't in a situation where she could have met someone like her. It sounds like Nicky is getting as much out of their visits each week too.

She told Delia that when she gets home from their visit her husband says “You've seen your mate haven't you?" and she's says "How do you know?" and he says “Because you're in such a good mood", it's nice."

Delia used to be a runner herself when she was younger, running to White City and representing Hertfordshire in races. So naturally, she thinks group runs are a great idea.

“I think exercise is a wonderful waste... I used to work with volunteers in an advocacy way, it's hard to get people to want to volunteer to do things…”

You're doing a wonderful thing

After finding out that we'd reached 100,000 good deeds, she wanted to share a few words of encouragement to everyone running each week.

"I'm delighted. If you're setting aside a bit of your time each week to volunteer in a group or as an individual, you're doing a wonderful thing in sharing your time. Keep it up!”

Delia’s also been doing some promo work to recruit new runners - she's already got her physio to get involved - and has some excellent ideas on how to spread the word: "Get it on the news, that's what you need!”