Meet the trainer for GoodGym Huddersfield

With a mountain goat-like knowledge of local hill trails, experience leading runs for Stadium runners, and a decade's worth of developing physical activities programmes, Saul Muldoon is now poised to launch GoodGym Huddersfield 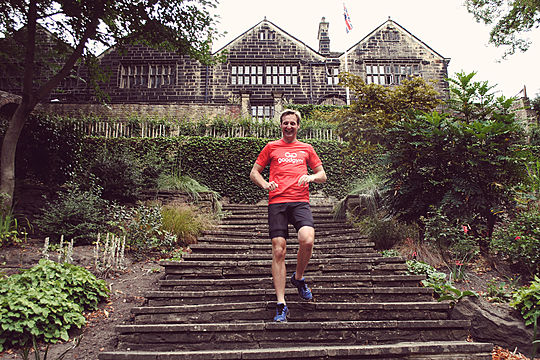 While, on the face of it cows have very little to do with running, they were pivotal in Saul’s transition to the sport. “Curiously the Foot and Mouth crisis of 2001 got me into running. Before then, I was primarily a mountain biker and hill walker, but with the countryside effectively closed for over 6 months to prevent the spread of foot and mouth disease I decided to try running. A few weeks training and a 10K road race later I was a confirmed runner”

Since this foray into running, Saul can name a few favourites. Many of these fantastic runs have been with the Stadium runners in Huddersfield. However, Saul adds, ‘As much as I love running with a group I also value the opportunity to run alone enjoying my own space and thoughts.’

Sharing his memory of one particularly memorable solo run in the Torridon mountains in Scotland, Saul paints an idyllic picture;

"Starting from near sea level before sunrise I broke through the layer of cloud to emerge onto the mountain top in bright sunshine. From well over 1000 metres up the views were simply sublime, with the surrounding mountain peaks poking through the like islands in a sea of cloud. Being so early I was entirely alone on the hill and enjoyed a cautious run/scramble along the exposed sections of the ridge in total solitude, before running back down past the first hill walkers of the day making their way upwards."

“Having originally moved up to Huddersfield from the flatlands of Essex, I simply love the hills. If you are a runner in Huddersfield you cannot avoid hills, and those who learn to love them become better, stronger runners as a result.”

I simply love the hills

Saul’s love for Huddersfield goes beyond its scenic terrain. He also enjoys the community spirit he has found there. As an individual he believes in the power of small things. He said,

“Contributions to your community are not only about big initiatives. Sometimes small, simple acts can be equally as important. Picking up a piece of litter as you run by, a friendly smile or a few words to an old person in your neighbourhood, holding a door open for someone....by themselves all tiny actions. But tiny actions can make a difference”

Tiny actions can make a difference

For Saul, GoodGym is one way runners can make this kind of difference. As the lynchpin of this new community-- Saul is hoping to build some momentum.

“I believe in what I do, I live the life. I walk, I run, I cycle, and I understand the capacity of exercise and physical activity to promote health, wellbeing and positivity. I am very keen to make GoodGym Huddersfield as inclusive as possible, particularly by motivating those who may not consider themselves to be “sporty” to get involved.”

He adds, “I see GoodGym Huddersfield as a superb opportunity to develop a tremendous team of people, and a chance to do something which can make a real difference to our community.”