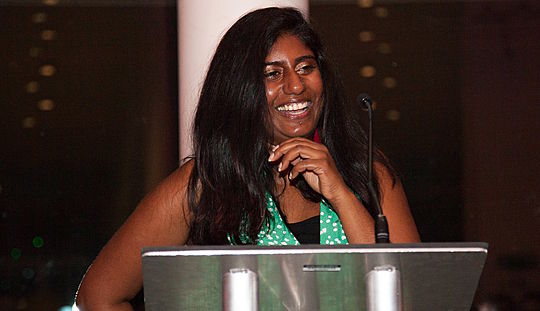 Reconnecting with my town

How GoodGym helped Sandy feel at home in Slough again

Sandy Dhaliwal is a runner with GoodGym Slough. On the 12th of September GoodGym, Nesta and the Mayor of London Hosted an event at London's City Hall to celebrate 10 years of GoodGym with many of the organisations that have helped us to to get to this stage. At the event Sandy gave a speech based on a text below, that she'd written answering the question: "What does GoodGym mean to you?"

I recently returned home after living for several years abroad. It was tougher than I realised to adjust back to life in the UK. My absence from friends and family made me a little disconnected from people and actually kind of isolated. I often wondered if I had made the right decision by returning.

After never really being able to get back into a routine with fitness - which I was sure would be something that could help me mentally - I sort of plodded along for a while and tried to just make the most of my situation. I signed up to a half marathon on a whim and decided this would force me to train as I would have a goal. I had never run before.

At the same time, GoodGym Slough launched locally. I started to attend with new friends I had made at work and finally started to feel that I belonged somewhere. It was wonderful to have something each week where I could meet my friends for a catch up, contribute to the community and work towards being ready for that half marathon - which I completed in a pretty good time (so my run leader tells me). While my training and fitness often suffers due to work and other commitments, I make a point never to miss GoodGym - if I'm not away.

It is a highlight to my week as I love seeing my friends and using my time to do something meaningful with my evening (as otherwise I would literally just be on the sofa), while also improving my fitness. I look forward to seeing people each week and have even started to entering running events with my fellow Slough GoodGymers, as well as seeing them outside of GG for dinner and drinks, gigs and festivals ...and have generally just become important people in my life. Without GoodGym and the friends I have made through it, it is likely I would have left the UK again, but now I'm really glad I didn't.

GoodGym has also given me a hobby that I never thought I would take up. I keep entering running competitions and fitness events as I know I have a wonderful and supportive community to do it with - as well as finding a goal to keeping up my fitness. On a more shallow note, getting fit has also improved my self esteem, I am more happy with the way I look and also the way I feel mentally. This is not necessarily because of GoodGym, but I don't think I would be as content with myself, if I hadn't been doing those weekly runs with the guys each week!

It is a bit of a by-product to being a member of GoodGym but being a member has transformed how I feel about myself for the better and I think also improved my relationships with friends and family because of it. I have found it much easier to reconnect with people and feel less isolated back home again, which really is not what I expected at all!

Read more stories from GoodGym
Find an event near you