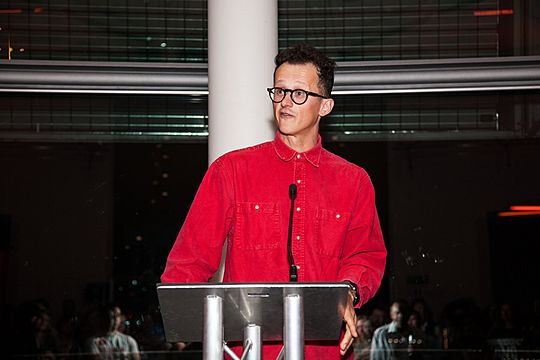 On 10 years of GoodGym

On the 12th of September GoodGym, Nesta and the Mayor of London Hosted an event at London's City Hall to celebrate 10 years of GoodGym with many of the organisations that have helped us to to get to this stage. This was the speech that Ivo Gormley, GoodGym's founder, made at the event.

I’ve been nervous about this for the last two days. It’s the same sort of nervousness I remember feeling standing on the steps of York Hall in Bethnal green thinking is anyone going to turn up. That was the first group run. Eventually, 11 people did. Mostly strangers. And they came back the next week. And people have kept on coming back and joining until we have become a movement of 15000 runners in 54 cities and boroughs across the UK. Thank you for turning up.

I’d like to thank The Mayor of London for hosting us here, Nesta for supporting the event and Rebecca Clarke for organising tonight, and to Pritesh for hosting, and everyone else who’s made this happen.

The GoodGym central team is 11 people. Lead by Gillian, Ed, Patrick and Alex, you enable all of this, you stay calm when we launch three new areas in a week and put enormous love and care in to supporting this community to grow. It’s a huge pleasure to work with you.

I’d also like to thank Mark Herbert and Ian Drysdale who were there from the beginning and whose belief in what are doing kept it going at that critical time.

We are constantly guided by our trustees: thank you Paul, Sarah, Ruth, Peter and Stephen for steering us in what we think is the right direction.

Those of you who have funded us and partnered with us. You have helped build this. I hope you can see , hear and FEEL what this movement means. To Nesta particularly without whom we would not have been here, you have worked alongside us and enabled us from a time at which we were not much more than just an idea and a name.
To Sport England, the Lottery Community Fund and to the London Marathon Charitable Trust. Thank you for seeing the value in what we do.

To parkrun we are proud to operate on the same planet as you. Your work is social infrastructure as important as the pyramids or the sewers or bridges. You’ve shown us what is possible in terms of scale and integrity. Thank you for your help and guidance and the example you set.

To our local Authority partners and the organisations with whom we work to support older people, including local AgeUK and Red Cross branches amongst many others. We can’t do this without you, we work alongside you and want to continue to do so ever more closely.

To the tasks we work with, You let us in to your parks in the night, you open up your foodbank, you give us the keys to the toolshed. You trust groups of us to contribute to your important work. Thank you for letting us in.

If you are a trainer, you are incredible. You are the spark that makes it all happen. You will feel it already from your runners, but you’re doing amazing things. Providing energy and light in the dark and the cold and building extraordinary communities around you.

If you are an older person supporting a GoodGym runner with their running; you’ve inspired us, with stories, tea and encouragement. You’ve shown us new aspects of ourselves and our communities.

To our TaskForce members - who setup community missions and help run group sessions. You are enabling GoodGym to go to new heights - making it more accessible and easy to get involved.

If you’re a runner or walker: You are the core of this. You help each other out in extraordinary ways, you put thousands of hours every month into helping projects around you and you’ve racked up more than 2.5 million Km in the process. Your energy, enthusiasm and care for your area and each other are what this is all built on. You are extraordinary.

So, after 10 years of being part of this, and talking a lot about running, what I really think this is about is about human connection. That our connections with other people are what define us , giving us meaning, belonging and make us happy. This is not about volunteers and beneficiaries, it’s about recognising that any connection is two-way and that we all have something to gain.

I spoke to one older person called Margaret in Birmingham two weeks ago, who we helped with her garden. A really simple task. She said all I really want to say, she said:

“What do we need to be happy? -food, warmth and love. We were put on the earth to look after it and each other. What better feeling is there than doing that?”

Sadly, this is reality for a lot of us. Though GoodGym started to try to make an impact on the issues of loneliness for older people, it’s younger people that are most likely to be lonely. We are living in a world in which we are increasingly less likely to be able to form these links, and in which social pressure to do so is increasing. Almost ⅕ young people now say that life is not worth living.

By being part of this, you are part of a movement that is building that human connection back into people’s lives. By doing what you do, and using your workout to connect with those around you, those like you and those different to you, you are doing something essential for both you and for those around you and something that the world desperately needs.

That trust and connection the is developed on messy nights shifting compost leads to amazing things. The coach who went to visit her runner in hospital, the friends who helped you move house, the person who persuaded you to come for a run when you were feeling down. The things that people do when they are connected and together, not alone.

This is an exciting moment, we've shown that we’re in this for the long term. You have made this happen.

There is so much more to do. Our goal make this mainstream, to support many more people to be active and to make sure no one is left alone. We need you; we need you as runners, as supporters, as collaborators. Together we can make a world in which connection, and not isolation is the norm. Together we’ll make the next ten years even more extraordinary than the first.

-Read more stories from GoodGym
-Find an event near you