GoodGym Exeter is on its way and on 20th August it will become our 52nd area to launch. With the highly anticipated start on the horizon we spoke with Klara Kjellgren, who will be the new Trainer there. She's really excited to be part of the growing GoodGym community and told us all about what motivates her to run and how she hopes to inspire others through GoodGym.

Klara grew up in the countryside of south Sweden and started running when she was 9 years old. Running quickly became a very important part of her every day life and now she's ready to spread the joy of running and helping others to the people of Exeter.

Nothing can beat the feeling of running to me!

Klara has had many running highlights over the years including some beautiful trail races but she said one of her favourite runs was the first time she ran after the birth of her twins.

It had been a rather challenging pregnancy so it took me quite a while to return to running. It was such an amazing sense of freedom to be back doing it and I soon started running with the twins in a buggy so that I could combine their nap time with some “me time”.

Drawing on my her experience as a busy working mother of four, Klara has said that she loves helping to motivate people by showing them ways they can fit training and running in their busy lives. She believes exercise should be fun and that there's no need for lots of equipment or a fancy gym. 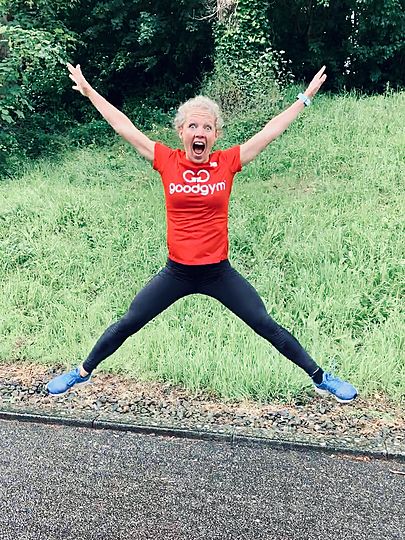 A short run can have such a positive impact on your whole wellbeing for that entire week!

Trying to spread as many positive vibes around her in every day life is part of Klara's character, so working with GoodGym to launch in Exeter was a perfect fit. So many people live increasingly busy but also isolated lives today and she's excited to get started with bringing the community together to get fit and do good, not just for the projects GoodGym Exeter will help but for the people taking part. So we know that Klara is great at motivating others but what keeps her going?

Knowing that running makes me a better person! Running gives me so much energy and I manage to channel that and achieve more in every aspect of life than I would if I didn’t run!

There are so many options for great runs in Exeter. There are some great flat stretches along the canal path that are perfect if you're new to running or if you want to run fast, but there are also lots of beautiful hills and trails too. Everywhere you go, there are lots of lovely green areas all around the city so you can get a fantastic variety of different types of runs.