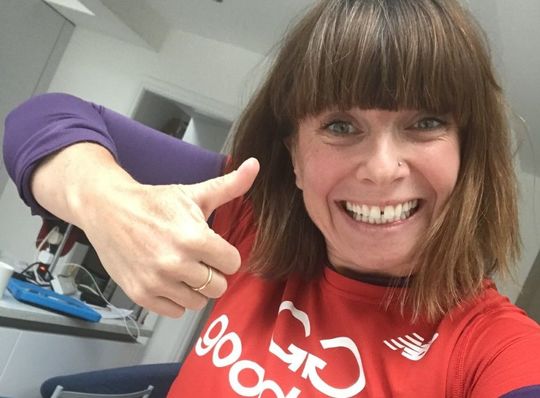 The vast majority of GoodGym activity involves exercise and helping out a good cause, but GoodGym Trafford members took part in something a little different – and of great importance.

“Eight GoodGym members took part in training piloted by the Suicide Prevention Board in Trafford with the aim of rolling it out across the community” explains Area Activator Kate Frain. “We were asked to take part and give our feedback about how we found it to help with the wider roll out.”

Kate has been a GoodGym member since 2019 and said the training has increased her awareness of what signs to look for when she is out and about.

“I found the training emotionally challenging but extremely useful” she admits. “It really helped to increase my awareness of how to look for signs that someone is considering committing suicide and how to take considered and appropriate steps.”

Kate says she has always viewed GoodGym as her “safe space” to share.

She explains: “Many of us come to GoodGym and share our feelings and it has led to our community being very close knit” she adds: “There is something about getting stuck into a task that enables people to open up.”

She believes GoodGym has helped her mental health: “As someone who has come throught mental health issues in the past, I found exercise and a sense of community a massive help” she explains. “I really believe in the power of GoodGym.”

Kate says the training helped her think about what tools she would need to help signpost people to the support they need. “I would recommend anyone undertake this training” she says “you could be anywhere in any situation and come across someone in need and I would always want to know how best to help.”

Learn more about GoodGym sessions near you here