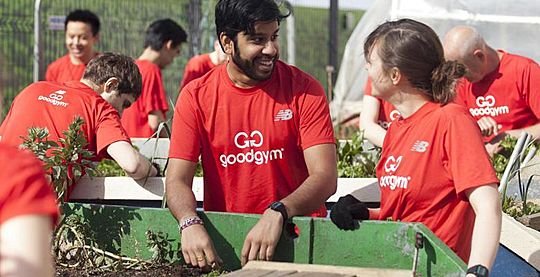 How to set a realistic goal

Setting a clear goal can make it more likely for you to get where you want to get to. Sarah Rajabalee spoke to GoodGym trainers and runners to get their advice on how to set useful goals.

With the days getting cooler, the nights getting longer and the London Marathon ballot having just been drawn, we thought it was a good time to talk about setting realistic goals.

Whether you want to to eat more healthily or run a marathon, it’s good to have a goal. It helps with taking control of your life, gives you a sense of purpose and a great sense of achievement when you achieve it. On the other hand, however, if you don’t reach your goal, then it can make you feel inadequate- that’s why it’s important to set goals that are realistic and achievable.

So, what should you think about when you set your goal?

1. Be realistic about how much time you're going to put in
For her running goal, Ealing GoodGym trainer, Oliva looks at her upcoming ‘running budget’ She says: “This is the amount of time I have coming up I can realistically allocate to running. If I know I’ve got a busy few months of work or am going away on holiday that’s going to disrupt training significantly, I wouldn’t set myself a big target. It’s setting yourself up to fail or be very stressed when you can’t do it. Running is supposed to be fun so if it isn’t, I don’t do it!”

2. Break it down
There’s nothing wrong with setting a big goal, but sometimes you have to break it down. Sarah, a runner in Camden, tries to speak to at least one person at events. She says: “I find networking really hard and it takes a lot for me to go up to a stranger and strike up a conversation. The first time I went to the monthly GoodGym social was really daunting for me as I didn’t really know anyone and I was really worried I’d end up sitting on my own with noone to talk to. I had to really psych myself up to walk into that pub and tell myself to say hello and to introduce myself to at least one person, but I didn’t have to worry. Everyone is so friendly and curious about you.”

3. Don’t fear failure
This is a hard one. Sometimes it's the fear of failure itself that holds people back. As a certain A. Einstein said: “Failure is success in progress.” Haringey Run Leader, Sarah believes a goal should always push yourself a little bit out of your comfort zone. She says: “Whether that's running faster, further or on new terrain, pick one thing to focus on at a time. Then have a think about the best case scenario: if you don't get sick or injured, if you don't miss a training session, what's the best you might be able to do? That's your A goal. Then set a B goal and C goal that you will still be happy with if things go slightly wrong. Revisit these at regular intervals in your training and adjust if necessary!”

5. Benchmark
“Setting realistic goals means not going overboard - or not being ambitious enough,” continues Graham. He says: “Think about your current level of fitness, how much time you can set aside for training, and what else is going on in your life. If you aren't sure about your current fitness, try running a parkrun - a free timed 5k on Saturday mornings - as fast as you can manage - to find out. You can also use running pace calculators to estimate what you're capable of based on recent races.”

6. Celebrate your achievements
Give yourself a pat on the back everytime you tick off a goal. It could be anything from a relaxing massage to your dream holiday. You’ve earnt it.