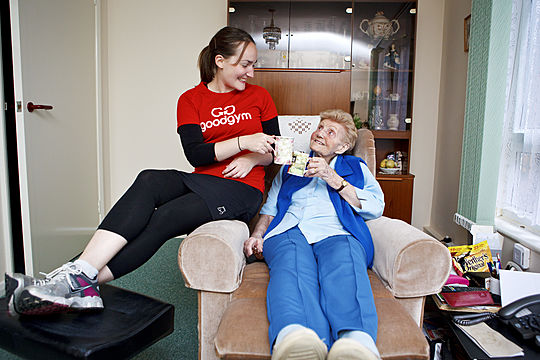 “What had started as a formal volunteering relationship became one of the most important relationships in my life. ”

I joined GoodGym in 2011 after seeing a short video about it on the BBC and thinking it was a brilliant and innovative solution to both loneliness and inactivity. I have been a regular runner since my early teens, although I have never moved beyond the “slow and steady” category.

Many other running clubs had seemed a bit too focussed on speed and GoodGym was a welcoming and relaxed group. After completing some group runs with the original Tower Hamlets GoodGym, which back then were led by Ivo, GoodGym’s founder, I went through the process of becoming a coach runner and was paired with my coach my in 2012.

I’ll admit that our first few meetings were probably not the easiest for either of us, as May struggled with my American accent and quiet voice and I had to get used to speaking at a louder volume than usual. After a few sessions, we had both worked it out though. We soon settled into a routine of weekly hour-long chats and tea. I am pretty sure my runs there were off-set by all the cake and pastries she would have waiting for me!

The first thing that struck me when I started visiting May was that she had been retired for a full decade longer than I had been alive. She was 95 and I was 24. It really helped to put life in perspective. May had seen so many things over 10 decades. Once, when I asked her about different jobs she had held, she told me she couldn’t remember all of them. After that, if I had a bad day at work, I would think, “Will I remember this when I am 95?” Most of the time the answer is no!

Our regular chats continued for 5 years, and what had started as a formal volunteering relationship became one of the most important relationships in my life. A chat with May always made my day a bit brighter and she became a good friend. Due to the fast-paced nature of London, the only people I was seeing more than May were my partner, flatmates, and co-workers. It would be lucky if I saw other London friends once every 2 months, let alone every other week. When I got married in 2016, May would have been a guest of honour if she had been well enough to attend. It was an honour to attend her 100th birthday in 2016. 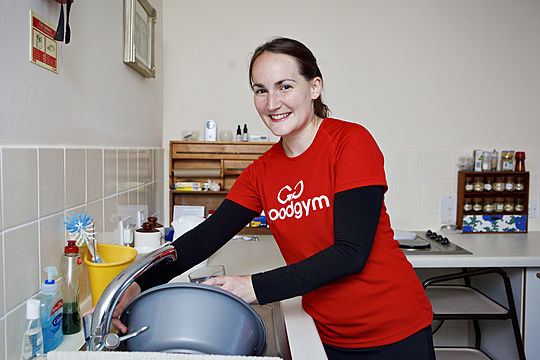 In 2017, I moved to Bristol and my official volunteering role as a coach runner ended. However, we're still in touch, she’s 103 and I make time to see her when I do go to London.

I started doing group runs again when I moved to Bristol, to meet people in my new city. I am now a taskforce member and run leader for GoodGym Bristol, which is a fantastically enthusiastic community.

The impressive thing about GoodGym is that it manages to address multiple social issues with a simple, and yet novel, solution. The time spent doing a coach run, group run or mission are the most productive hours in my week. In just a couple of hours, I have exercise, socialised, and done something good. It is by far the easiest and most flexible way I have found to volunteer, which is important as people lead increasingly busy lives.

The way GoodGym bridges generational and cultural gaps is an important by-product of the main mission of combatting loneliness. A coach run may help you understand the needs and views of older generations and a group run may take you into a neighbourhood where you would never normally go. In an age, where communities feel increasingly divided and when it is so easy to get wrapped up in your own world online, getting outside and breaking a sweat with others to help others is powerful.

-Find out about GoodGym in your area