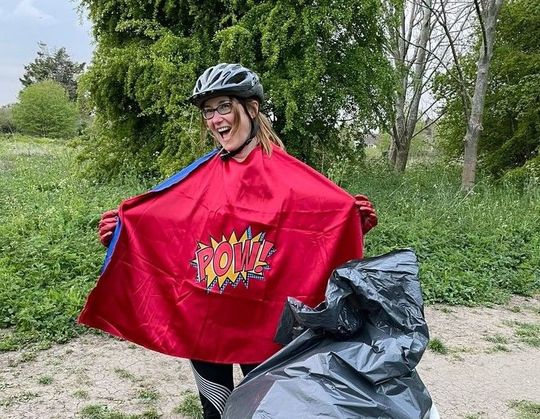 Rachel White and her GoodGym experience

Reaching 100 good deeds for GoodGym is a big deal.

Rachel White, 43, from GoodGym Kingston Upon Thames has just achieved this milestone, with her husband not far behind.

“My husband, Dave, originally encouraged me to join GoodGym and he's close to his 100th task” she explains. “It will be a lovely sense of achievement for us both to earn our wings.”

Rachel joined GoodGym back in July 2018.

She’s taken part in litter picks, gardening, cleaning a homeless charity office, collecting water from the Thames for a community garden, shopping for isolated neighbours during lockdown and dropping off essential medication from the pharmacy.

She adds: “My 100th deed was to clear the Hogsmill river bank so planting could be done in preparation for 600 water voles being released later this year.”

“I enjoy helping out as a group and getting to know other GoodGym members in my community” explains Rachel. “I've met so many lovely people that genuinely care about their neighbourhoods and want to improve things.”

She says GoodGym has also helped her fitness.

“I joined as a way to get fit after having two kids and if I committed by signing up for a task then I couldn't bail out easily” she says. “Also, being outside in nature makes me happy whatever the weather and whatever the task.”

Rachel is also a member of TaskForce, which she says gives her more ownership of her volunteering experience. She explains: “Small responsibilities such as arranging tasks and welcoming newcomers have made me feel more part of the organisation.”

“I love seeing the progress that can be made even with a small group of volunteers - it's very inspiring.”