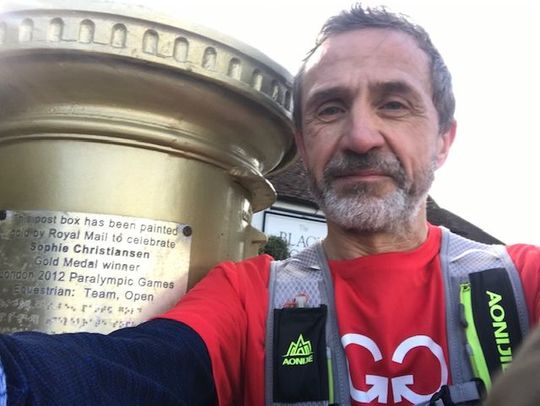 Having a goal can help keep your running on track, just ask GoodGym Ealing’s Harvey Gallagher.

Harvey 56, has been documenting his runs to the gold Olympic post boxes. “It wasn't really a plan at first” he admits. “Having the 2012 Olympics here was so inspiring so I thought I'd run to a couple of the special gold post boxes when lockdown 2021 started, just to keep myself motivated, then a couple more and then it got more serious.”

He has learned about amazing athletes and has now visited 20 of the boxes across London, in snow, rain, wind and sun.

“The daft thing is the number of times I have reached my destination and run straight past the gold post box” he exclaims “you'd think they'd be hard to miss!”

But it won’t stop there, he has already planned a few more challenges for the future.

“London football grounds, recording studios, the monopoly board” he reels off. “Enough to keep me in runs for some time to come.”

He explains: “Last year I trained like a demon - running, cycling, core and strength exercises. I even discovered yoga, which is quite something for a middle-aged northern male.”

He said the toughest thing was only seeing his granddaughter once since February 2020. “Video calls aren't the same” he adds. “but I've recently seen her and it was absolutely ace.”

GoodGym has helped Harvey keep active during a turbulent year, and he has been a member since 2017.

“I didn't feel like the odd one out” he recalls, looking back at his first session. “I stuck with it and over time I feel I've become part of something special.”

Doing good in the community, has been the main appeal for Harvey.

“The opportunity to exercise with others while helping out in my local community is what really makes GoodGym so good” he explains. “I feel really strongly about investing my time in my local area, from shopping local to tidying up. It's how we end up with nice places to live, in communities that care for each other.”

“We each have a role to play, big or small, it doesn't matter.”

Harvey has joined GoodGym missions in other areas, and says the vibe is just as good. “The people make you feel welcome, it's a team. And giving something back warms your heart.”

He continues: “The thing that has always surprised me most, is how much I get from helping others - and doing this as part of a team where you share the same goal is lovely. “

“I am paid back in positivity way more than the bit of my time I put in.”

As for his post box challenge target? He adds: “I'm just going to keep going...until I stop.”