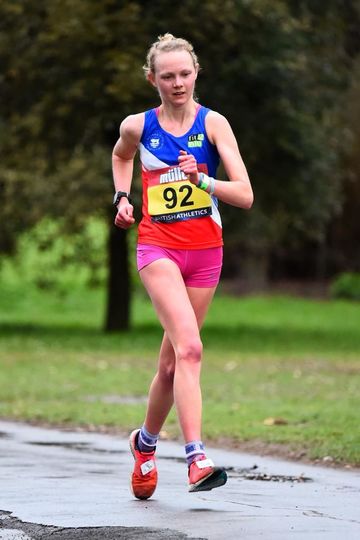 All fitness abilities are welcome at GoodGym, from beginners to British Champs. Meet Gemma Bridge.

Gemma is the GoodGym Area Activator for Leeds. She is also the British Champion for race walking.

“I first saw race walking at the 2012 British Championships as a spectator” says Gemma. “I thought it looked like a challenge and I liked how it was more than just who was the fittest athlete.”

In 2017 she moved to Leeds and made the switch from running to walking, after suffering with some recurring niggles.

“It went much better than I expected” she exclaims. “I had planned to take the first year just enjoying the process of learning a new sport, but within 6 months I had been selected to compete in the World Athletics Championships.”

Despite injury, she also competed at the Commonwealth Games in Gold Coast, Australia in 2018 and in the world team race walking champs in China. She credits GoodGym sessions with helping her stay motivated to work out.

She explains: “Sometimes finding the motivation to train, especially when I am already tired and its cold and wet, can be tough. But having a task lined up, which I am doing to help others, gives me the extra push I need to get out.”

Running, walking or cycling to missions helps Gemma build up extra fitness and she says: “I also enjoy working with others and helping out.” She adds: “I think the wellbeing and mental health boost that I get from that is just as important for me and my training as the fitness side of things.”

She got involved with GoodGym for the community aspect and is also Running Mayor for Leeds. “We are all on the planet together and it could be a much better place if we supported each other” she says.

“I enjoy supporting community work, because it gives me a chance to use my skills and connections to give something back and make a difference.”

She continues: “I am hoping that my role as Running Mayor will link up well with my role as Area Activator - as they can both encourage and support people to get active and do good in their communities.”

“I competed in the British champs on the track in September 2020, and surprisingly took the win” she explains “Most recently, I took part in the Olympic trials held in Kew Gardens and although I was unfortunately disqualified due to breaches of technical rules, I am confident that with some more technical guidance I can perform well in my next race.”

2020 has also meant changes and challenges for GoodGym.

All of the community missions Gemma has completed have been during the pandemic and socially distanced, but she has enjoyed packing food parcels, delivering goods and painting.

“GoodGym is much more than a running club or a group of volunteers” she says “it is a community built for a community.”