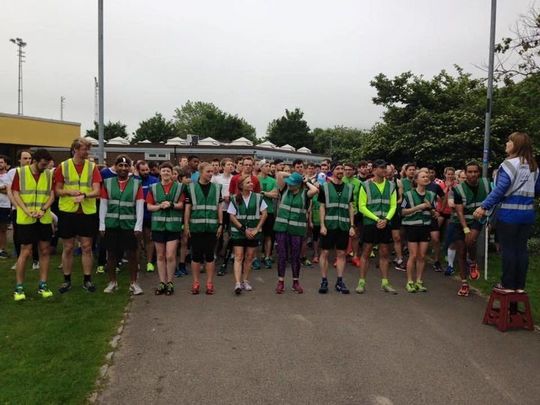 GoodGym or parkrun...which t-shirt to wear?

I’ve been running with GoodGym and parkrun for nearly 4 years and I’ve been asked to share my thoughts on both organisations. Running with GoodGym and parkrun is a bit like putting on my favourite running socks. Both feel better than all the others, yet the left and right ones are equal in how amazing they are to run in. And I kind of miss them when they are in the wash and I have to put on the other pairs :-) 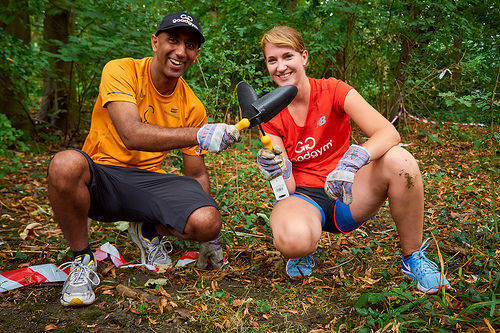 When joining a running group for the first time the competitive element can make beginners feel daunted. They often feel they are too slow or can’t run far enough. I love how the GoodGym group runs and parkrun do away with all of that. Every GoodGym group run I have been on had a backmarker and parkrun a tailwalker. I love how speed isn’t emphasised so much and that everyone is encouraged to participate no matter how slow you perceive your running to be.

everyone is encouraged to participate no matter how slow you perceive your running to be. "

Indeed I love the recent parkrun change from ‘tailrunner’ to tailwalker’ to help encourage people to get involved. At many parkruns I have been to it is usually the runner that accompanies the tailwalker that gets the biggest cheer. That cheer isn’t a patronising one or one of sympathy. It is a genuine cheer of appreciation from fellow runners who understand the efforts you just put in to get yourself to the finish. 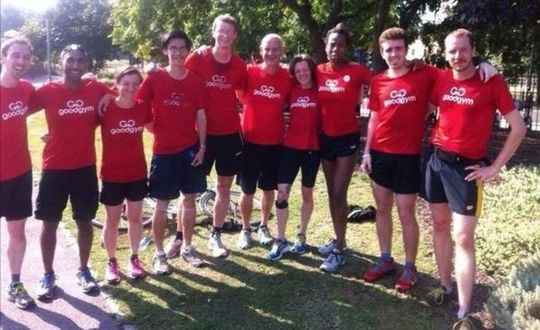 A GoodGym group at Mile End parkrun circa 2013

One of the things I like about the GoodGym group runs is that you have access to a qualified fitness leader who imparts their knowledge and experience on the group. I have picked up so many lovely running tips from them. Ade’s ‘Hand-to-ear/pockets’ and Shaun’s ‘Horse legs’ (don’t ask!) spring to mind.

I no longer have that sluggish running feeling"

Likewise with parkrun I have met many experienced runners who are more than happy to share useful tips. I mentioned to a group of parkrunners that I felt ragged in the first mile of parkrun. Mile End parkrunner Paul who has completed over 250 parkruns gave me a really useful suggestion, changing my warm up. Sure enough I no longer have that sluggish running feeling.

I love how both GoodGym and parkrun have obvious benefits for the local area. Simplistically, the health and well being of a community will be improved if it is active one. That doesn’t mean breaking speed or distance records, it just means getting off the sofa and engaging oneself in brief, regular activity. Both GoodGym and parkrun have delivered in that respect and they will get my continued support because they are doing so in a way that is accessible and inclusive to the neighbourhood. A lot of work has gone on behind the scenes at both organisations to help deliver group running to areas that might need it more than others and that is to be applauded. 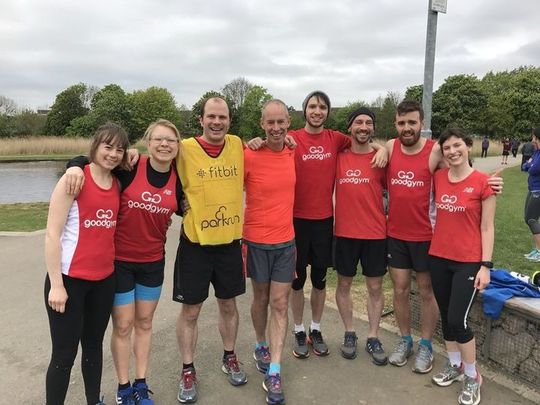 The partnership between GoodGym and parkrun that started last year to connect runners to isolated, elderly members of the community is a beautiful one. Using an active person (the runner) and someone less active/isolated or even housebound (the elderly person) to create a friendship….amazing! I’ve been running to my elderly GoodGym coach Derek for a while now and there is no other situation I can think of where I’d go out and run a half marathon distance on a week day night, other than to have a cup of tea with my GoodGym coach Derek. He doesn’t live far from me either! 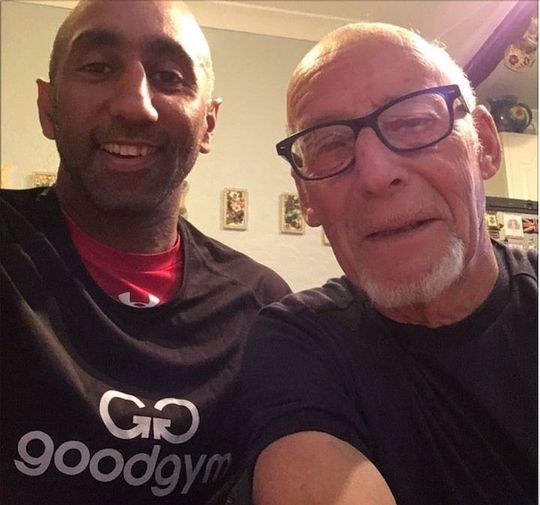 Hassan and his GoodGym coach Derek

He is as connected to GoodGym and parkrun as I am and I love that."

That has happened a few times when I’ve left Derek’s house, feeling inspired by our weekly catch up so I’ve added on a lot of distance on the way back. The greatest endorsement for both parkrun and GoodGym comes from Derek himself. He thinks both are amazing and he even checks the weather for me if he knows I’m run directing at Mile End parkrun or if there is a GoodGym pace team coming down. He is as connected to GoodGym and parkrun as I am and I love that. Both GoodGym and parkrun put a lot of love back into the community.

So which t-shirt to wear?

It is great how GoodGym and parkrun connect runners of varying abilities, for making group running accessible, for fostering an environment which improves the physical and mental health of its participants, and to me the most important part…for simply creating a happier and more lovely place to live in. 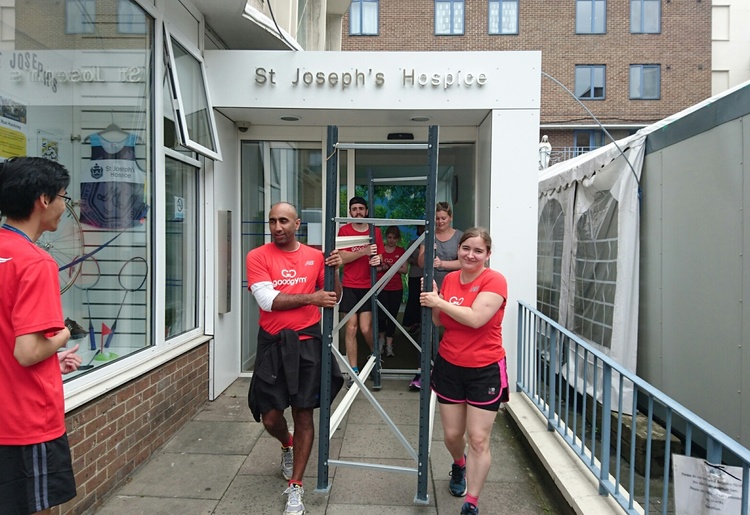 Hassan on a GoodGym doing some lifting at St Joseph's Hospice

I feel privileged to run with both groups as they make you feel part of something special. So much so that I find it difficult choosing whether to wear a parkrun or GoodGym t shirt at running events. Both have made such a big difference to my life and both mean a great deal to me for what they are giving back to others. Both GoodGym and parkrun put a lot of love back into the community and that to me is priceless. It seems to me that there are two common character traits amongst the GoodGymers and parkrunners that I have met and they have these in abundance….generosity and kindness.