From familiar faces to running partners

Nick Marsden is a keen runner and volunteer. Each week he leads a Keep Fit group for Bexley Mencap members who have learning disabilities. A couple of weeks back a few runners from the group joined the GoodGym Bexley group for their first ever GoodGym task.

Here Nick writes about the neighborly partnership that GoodGym and Bexley Mencap have forged and the difference it has made to their organisation and members.

You could say that the members of Bexley Mencap have been there since the start of GoodGym Bexley. When the group launched in February last year, we hosted the very first group run task at the Bexley Mencap office and the group helped clean the alleyways around the office.

Since then you might say that Bexley Mencap’s association with GoodGym Bexley has been a case of revolving doors - at least that’s how we've got to know each other.

From familiar faces to running partners

On Monday nights, I run a keep fit class at the Crook Log Sports Centre for Bexley Mencap members with learning disabilities. Every week the class would finish as Tim and the GoodGym runners would arrive to start their warm-up. So every week we’d say a quick hello and goodbye to each other.

As some of our members started to get fitter, we started to see Tim and some of the GoodGym runners more regularly at the Bexley parkrun, just across the road in Danson park.

A year later, we asked GoodGym to clean the alleyways around our office again.

This time three of the Bexley Mencap members, Chris, Emmanuel and Matt, were keen to run and help too.

Since that first run, another member of our group Robert has decided to join too. 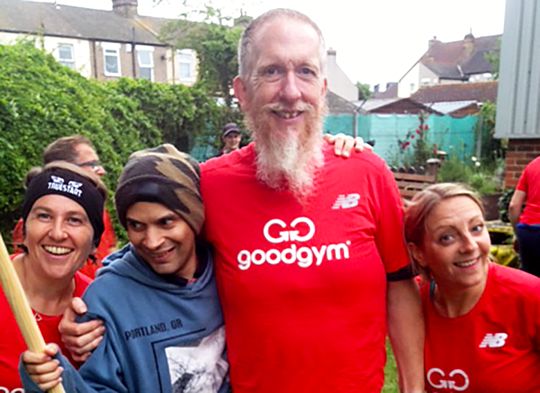 We met Tim and the team outside the sports centre as usual and instead of saying goodbye, we joined them on a warm up run (or warm down run in our case!) Our destination was the Danson Youth Centre who needed some help taming an overgrown garden.

Matt helped Deborah with weeding the front borders and brushing the pavement, while Chris and Emmanuel headed round the back with the rest of the group to cut the hedge and donned some gloves to weed the garden.

I hadn't appreciated just how well the GoodGym team work together - it must be because they've had so much practice! The group were full of enthusiasm and encouraged each other to work hard on pulling away the weeds that had become entangled in the hedge. In no time at all, several refuse bags were full, before Tim called time on proceedings.

Why volunteering can be a great leveller

It was great to combine running with some work for the local community and also to be part of such a welcoming team.

It doesn't matter what skills or abilities you have. Every task is important and it needs to be done, however big or small.

Pulling up the weeds and mucking out together is a great leveler and provides an opportunity for everyone to get involved. 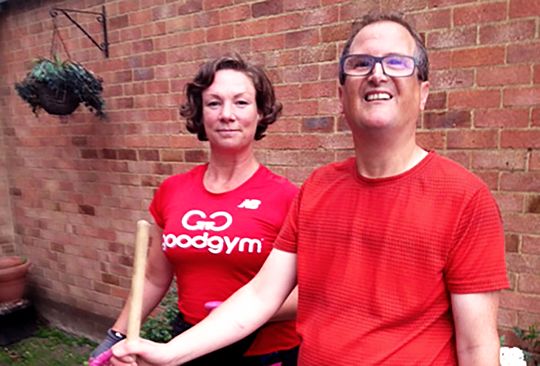 Matt usually helps out with gardening for a special needs college (a dustman's holiday for him!) while Chris is a caretaker at a local school - so both of them were no stranger to a brush and a pair of cutters. Emmanuel is relatively new to the area so joining the GoodGym group task is a great way to get to know people and gain more confidence.

Making a difference in our community

Matt, Chris and Emmanuel are all volunteering as part of Mencap's Gateway Beacon Bronze Award (think Duke of Edinburgh Award) for people with learning disabilities.

Volunteering with GoodGym is a great way for everyone to get experience so they can meet the criteria for the award at the same time. This run was a perfect opportunity of how GoodGym provides an opportunity to help the learning disabilities community and of to help the rest of the community.