Discovering more ways to do good

The TaskForce at GoodGym Portsmouth has been going the extra mile to do as much good as possible by organising community missions outside of Portsmouth’s regular group run. Rebecca Clarke, GoodGym’s Communications and Marketing manager spoke with Maxine, a member of Portsmouth's TaskForce

Maxine has been a member of GoodGym since 2019, running with trainer Katie and the team at Portsmouth since then and completing an amazing 71 good deeds in and around Portsmouth. She is also one of a large group of 17 TaskForce members in the area, who regularly organise extra community missions in the area.

As a self-professed shy and nervous person, Maxine discovered GoodGym by chance and built up the courage to attend a group run shortly after moving to the area.

After completeing a few good deeds she said she was “hooked” and it had already changed her life for the better.

Not only did GoodGym give me the motivation to exercise more regularly, it brought the opportunity for new friendships and a sense of purpose in my life.

Maxine thought joining the TaskForce seemed to be the most logical next step as she wanted to spend more time with these wonderful people and help out as much as possible. She joined shortly after completing her 10th good deed.

Maxine’s most memorable community mission was Clad To Lend A Hand.

On the community mission, she ticked off a lot of firsts for me; her first report written and photographed, first mission off of Portsea Island and her first time running 18km in one day.

We may not have been many but it was still a great laugh, the GoodGym spirit was of course there and we accomplished a lot in our allotted time. 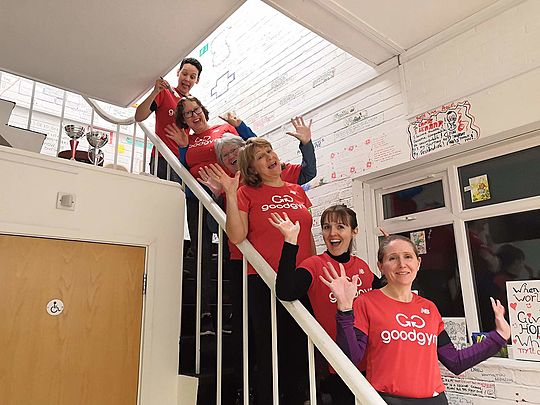 Maxine moved to the UK from the US, and feels that GoodGym has made an impact on her wider life. She said, “Being part of the taskforce is like having a family away from home, which is especially important for me, having no family in the UK.”

I love being part of a group of inspiring people who want to make the world a better place and brighten yours up while they're at it.

Becoming a part of the TaskForce has made Maxine feel more at home in Portsmouth. She now feels confident to write run reports, backmark and meet and welcome new members - things which she says she would have been too shy to do before GoodGym.

Maxine has her own advice for other GoodGym TaskForce members across the country.

Do not feel daunted by all of the different things you can do as a TaskForce member to aid your trainer, just help with what you can or are most interested in doing! For example, if you're into photographer sign up as the photographer, if you prefer to walk then become a walk leader! Every little helps and you will be most welcomed and appreciated for your help :)