GoodGym has awarded its 2020 Inspiring Individual Award to CJ Jessup who racked up over 500 hours of volunteering during the pandemic. They helped enable support for hundreds of older people and ran themself to help many.

The award, which will be handed over in a virtual ceremony in January, recognises individuals in the GoodGym community who have demonstrated extraordinary dedication, kindness or effort in supporting their community and fellow runners. Nominations were made by TaskForce, staff and area activators across the country and a shortlist of runners was compiled by GoodGym staff. The award was then judged by founder of Hustle Crew and GoodGym trustee Abadesi Osunsade, television presenter Davina McCall, parkrun’s founder Paul Sinton-Hewitt, and Sean Coxhead’s wife, Karina. 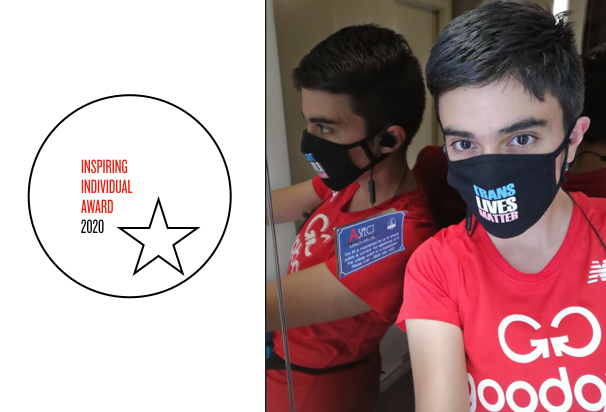 CJ was called on the phone last week to let them know they'd been nominated and that they'd won. They said: ‘I feel really bowled over. And really honoured. That sums it up. I think it’s really special. It’s really nice to have your contribution recognised but you don’t expect it. I wasn’t expecting this. It’s really nice. I’m really glad that people feel I’ve made a difference. Thank you.”

How CJ won the award

CJ Jessup won the award because they enabled so much support for older people and made a positive contribution to the GoodGym community overall.

Overall CJ contributed to a huge increase in the amount of support that GoodGym was able to provide older people. During the pandemic we experienced a huge influx in referrals and have completed around 5000 tasks for older people.

Those who nominated CJ said what a positive impact they'd had on the organisation both in completing and enabling tasks and helping to move GoodGym towards being a more inclusive community. CJ who identifies as non-binary has consciously supported GoodGym to learn from their experiences. CJ said:

“This year I’ve been thinking more about challenging biases and assumptions and being a good ally. Because of what's happening and BLM, it’s made me think a lot about being a better ally and what can I speak on from my personal experience and when I should listen to others and amplify them so that people can educate each other. We all hold a bit of influence, how can I kind of talk about these things that I see in queer spaces and how can I give people the chance to hear a perspective that they haven’t heard.

I think it’s important for people to see that there isn’t one part or facet of identity that totally explains who they are, trans, non-binary, gender non-conforming, we are not just that, we are that in combination with all our strengths and flaws as human beings. It’s good to do small things and try to push them further. Just to be always trying to make things fairer and more inclusive. It would be great to factor it in. We should always be on the lookout to make our communities more inclusive.” 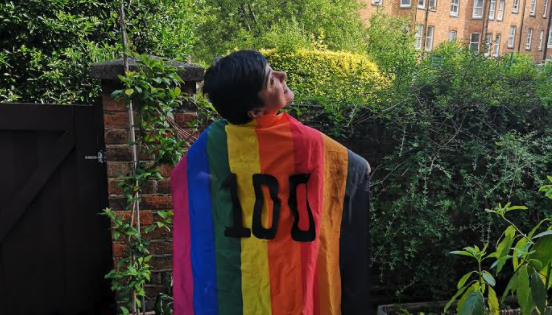 Loneliness and isolation have become critical issues during the pandemic with a significant increase in both becoming increasingly apparent. Our partner the British Red Cross has produced research finding that:

The work that CJ was doing addressed both of these issues, helping provide both practical support and friendly human contact. CJ said:
“The main things I was doing was liasing with the people GoodGym helps on the phone… loads in a day and sometimes those conversations were easy and sometimes it was hard because people were having a hard time with the pandemic. It... bought home what people were going through.“

GoodGym’s work is shown to increase wellbeing. External evaluation from before the pandemic showed that for older people there is an average of a 28% increase in life-satisfaction after 6 months of visits.

Abadesi Osunsade said about CJ: “Loneliness among the elderly becomes particularly painful to think about in times like the pandemic where we face lockdowns and other restrictions. It's incredibly commendable that CJ spent 500+ hours creating meaningful connections with older folks in their community.“

A shopping trip CJ completed for Ms E in Camden

Responses from the judges

This was the first year that the award has been given to someone other than Sean. It's also been a uniqe year for all of us. The judges recognised the extreme pressure that everyone has been under and commented on how many GoodGym runners has taken on significant extra responsibility and work to supprot each other.

Paul Sinton-Hewitt , parkrun’s founder said: “Given that we have suffered under the Covid regime for the best part of the year [the nominees have been] so effective, dedicated and kind. All of the candidates exemplified the purpose of this award. Keep up the good work.”

Davina McCall commented that “GoodGym feels like a family which I think is really at the heart of what GoodGym is all about.”

Karina Coxhead, Wife of Sean Coxhead and mother of their daughter Freya said: ”It means a great deal to myself and Freya that Sean’s memory will be kept alive through the Sean Coxhead Inspiring Individual Award. He loved running and helping others and GoodGym gave him an opportunity to do both. Goodgym is a family of like minded people that pull together and support anyone in need, and have a lot of fun while doing so. I believe you are all inspiring people. “

Find out more:
* Cheer CJ on their profile
* Read CJ's story on GoodGym and pride