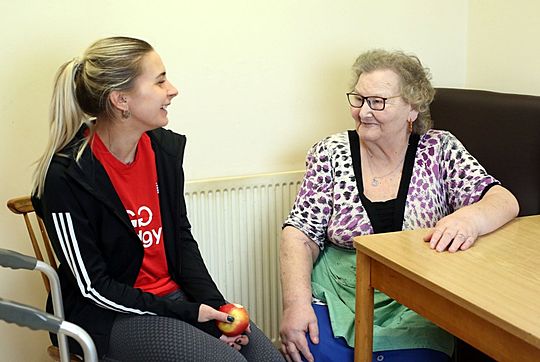 Caring for the community

Connecting care home residents and runners across the country

Aside from the good deeds we do on mission and coach runs, GoodGym runners and walkers have found ways to help isolated older people on group runs too. For this month's theme on 'give it heart', GoodGyms Marketing and Communications Manager, Rebecca Clarke, takes a look at some of the care home tasks happening around the country and what they mean to residents, runners and care home staff.

The 2011 census says that older people aged 65 and over make up 22 per cent of our society. And that figure is only going to get bigger, as government reports suggest there are likely to be an additional 8.6 million people aged 65 years and over – a population roughly the size of London - in the next 50 years' time.

For the percentage of those older people that live in care homes and supported living services, countless hours are put into caring for residents and building relationships, to make the lives of these people more enjoyable.

I spent 10 years of my life visiting a beloved grandmother in care homes across the country. Even from an early age, I would often be struck by how sad and lonely a place they can be. It was not unusual to find her sitting alone, and her face lit up whenever we'd make the time to visit. Sadly, it was also common to notice that some residents did not have visitors at all, with care home staff too busy and overworked with caring for large groups of people to take the time to socialise and chat with every resident individually.

Listening to my grandmother it became clear that that losses we experience during old age – of health, spouses, a familiar home, and of identity – can become ‘triggers’ for loneliness that need to be responded to as early as possible.

So that's why over the last year or so, it's been very rewarding to see so many GoodGym group run tasks that involve groups running or walking to visit local care homes, to provide a mixture of practical and social help to the residents and staff.

But what do these visits mean not only to staff and residents, but the runners? In a society where the government now employs a minister for loneliness , two-way connection is now more important than ever, and feedback from runners on these sort of tasks suggest that both entities find the sessions a rewarding and positive experience.

In Woking, the group have been running to put on a quiz night at Brockhill care home.

On arrival at Brockhill, James says that runners are always greeted by the residents who are always pleased to see the group.

I have been a member of GoodGym for around a year now and it is always a great pleasure to visit Brockhill, which we do every couple of months and I am sure I can speak for everyone when I say we look forward to coming back next time. - James, GoodGym Woking Run Leader

The group devise quizzes for the residents in advance of the session, so that there is something new for residents and runners alike to enjoy.

In Bournemouth, the group run to help and make a difference at the Abbeyfield Wessex Care home in Westbourne. A not-for-profit care home , the residents often rely on volunteers to come and spend time with them socialising.

After a run along the coast line, the group spend time running group quizzes with the residents, as well as organising craft sessions for everyone to get stuck in on. At a recent visit to Abbeyfield, the group were tasked with creating bird feeders to then sell for the amenity fund along with the reseidents, using pine cones from the garden.

There really is something for everyone - Manuel, GoodGym Bournemouth trainer

The rest of the group enjoy catching up and chatting with the residents, which Manuel, the trainer in Bournemouth, says makes for a really rewarding evening for both the runners and the residents. 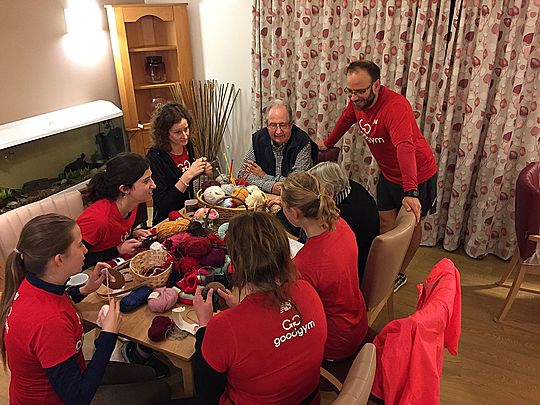 A bournemouth session at a care home

GoodGym Norwich have been running or walking to visit local care home, RedMayne View, for over a year now.

Sandra Spanton, the care home manager, spoke about these tasks and was featured in GoodGym's ten year book. She said:

It is so lovely to see every tenant getting very special one to one time from people who are genuinely interestedin their lives and well-being. 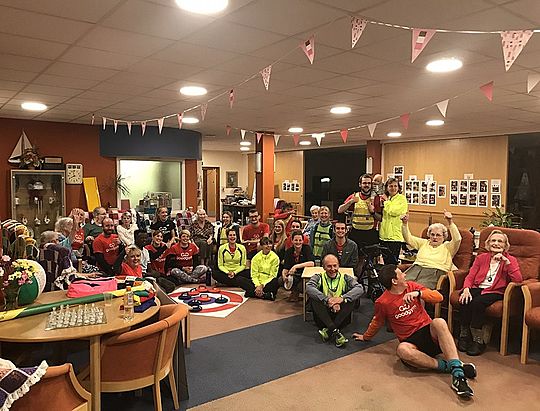 Runners in Norwich at Redmayne View

In Swindon, the group run to do a variety of tasks at a local care home ran by the Guinness Partnership Trust. 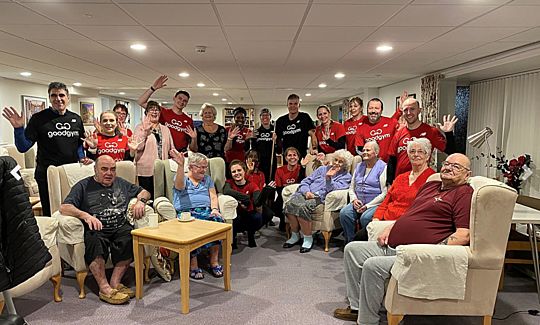 If the group aren't sprucing up the care home residents gardens or completing cleaning tasks, they enjoy tea ,cake and by chat to the residents over a game of pool or darts.

Dominique, at the Guinness Partnership says, "After the first GoodGym task, the residents talked of them fondly for a very long time, when the volunteers came back for a second visit, the residents were again delighted to see them all and again, the social impact was tremendous."

In Bexley, the group separate into two, walkers and runners, to visit the Adelaide Care Home.

The tasks range from practical to social. The group has recently painted a local care home, something that the carers are unable to find the time to do themselves. The group also practice their 'Dementia Star' training, taking on a run before being welcomed by the nurses and carers and introduced to some of the residents with dementia for an evening drink and cake.

None one sums up this impact of this as well as Tim Dickson, who leads GoodGym Bexley to the Adelaide care home.

Most our tasks we do are for people that are not there at the time, but this evening I really experienced first hand the good we were doing. Yep, just by engaging in conversation you could see and feel how the residents evening had been up lifted by our presence. Let me tell first hand how rewarding that felt. It felt awesome!- Tim Dickson, GoodGym Bexley