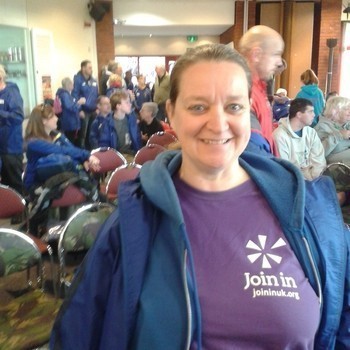 I am a UK Athletics endurance coach and have been coaching beginner runners for many years. I am also a qualified exercise to music and chair based exercise instructor which I teach to groups of older adults who are sometimes greatly isolated socially, and who venture out infrequently, but who are in need of social contact. I have been involved in volunteering in some way shape or form since I was a Brownie, over 40 years ago and have volunteered at many large scale events, including the London Olympics in 2012, and The Glasgow Commonwealth Games in 2014. I have also worked with groups from the Special Olympics, The Cerebral Palsy Games and the Invictus games, all working with people who have learning or physical disabilities. I also support a lot of local groups and have been volunteering with the running club for over 10 years as a coach and as secretary on the committee for several of those. I am currently on the committee of my local community centre who provide many local services to the local area. My big passion is to get people active, whether young or older and to be able to get more people involved socially as well as physically by combining the roles via goodgym would be perfect.

Sue has not yet recorded any activity on GoodGym.