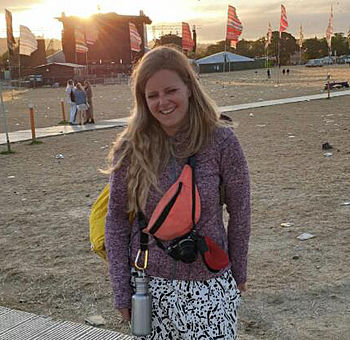 Organisations Marieke has pledged to support

Marieke went on a mission
Mission

We met outside Ms M’s, who in time opened the door and told us what she wanted doing. A week or so ago, a couple of GoodGymmers came to make a start on her garden, which had become a jungle of brambles and bluebells. Today we were to carry on, although, Ms M despaired that she felt all the weeds removed from last week had come back with a vengeance!

We head around the side of the house and through the wilderness which was the side gate, and into the garden. It was clear we had our work cut out! One side of the garden was blue-Ming with bluebells, and the other had some cheeky weeds poking out of the soil. The patio and the side alley, although paved over, were a mini forest, with green weeds sticking out of every crack and crevice possible. There was also a large plant of some sort - not quite a bramble, not quite a nettle, but some sort of alien hybrid of unwanted botany taking over the front of the house too.

Marieke had her eye on the alien hybrid plant, and Ms M was happy for us to do what we pleased, but seemed to like the idea of clearing the front and the alley ways. She left us to it with a selection of tools and a roll of heavy duty bags, and off we went.

Part one we took on together - Marieke chopping the nameless plant at the front of the house, which had grown creepers and leafy vines along the floor, and myself on bagging duty. There was something quite arty and elegant about the way Marieke held her choppers, and between us we had managed to hack and tidy away a majority of said bad boy plant.

We had to get to the root of the problem still. Despite most of the leafy and viney bits residing in their new home of the bin bag, there were still a few chunky roots which had obviously made their way under the pavement. This was my time to shine, and I completed some sort of leverage manoeuvre squatting over a spade to get underneath the heavy roots. It was a success. It looked odd, but it worked, and like that the front of the house looked much better already. And only one big bin bag needed!

It was time to go back to black bags and to the back garden again. Marieke attacked some brambles trying to make home in the drain pipes, and then got around to de-weeding the garden bit. I, on the other hand, tackled the side alley way (quite literally, but I promise the thorn Bush came off worse than I did). Another bag filled from the side of the house, full of unwanted plants, and I’d only got half way down before we realised we’d been at it for over 90 minutes.

We reconvened, and although it was still definitely a bit of a jungle, it was starting to look better - and comparing the before photos to the after was unbe-leaf-able. A thorn-tastic difference.

We let Ms M know we were finishing up for the day, but there was still more to be done. We may not have got everything completed, but we had made a big difference, and GoodGym will have to sweep coming back to get the task thorn-ished.

Wood you believe it, we finished two tasks!

Tue 11 May
•
Report written by Michelle

Tonight seven of us made our way over to lend a hand at Cultivate London.

Goodgym have been helping at Cultivate's sites in Acton and Isleworth for a while now and we are back at the Salopian Garden in Isleworth next Tuesday.

Auberon the site manager at Cultivate's Acton site set us to work in a couple of groups doing two tasks; filling a skip and sanding and treating some planters made of repurposed pallets.

We were joined by Daniel on his first community mission, having completed a record fast gardening mission with our lovely Natasha a couple of weeks ago. We also welcomed Michelle to her first Hounslow task, great to see you both!

Varnishing Act Emily, Daniel, Michelle and Chris made light work of moving a large pile of unwanted materials and pallets into the skip while Marieke and Michelle G sanded the flower planters and treated them, before everyone got stuck in to finish the job.

Crate work all, looking forward to next week when we head to Salopian on Tuesday and from next Wednesday all being well we should have our standing reservation back at The Old Pack Horse!

Balsam.... and so it begins

Mon 31 May 18:30 pm
Map
Petersham Lodge Woods , River Lane, Richmond, TW10 7AG
Sign up now
Help to control the spread of this greedy weed that disrupts the biodiversity in our area

For some you will be all too familiar with Balsam Bashing and the joy that pulling it brings as well as the nettles and stings in doing so.

Every year for the last 5 GG Richmond have tackled this huge beanstalk to help control the spread of it's pollinators along our riverside and this year the council and environment agencies in our community are rallying troops to assist again and so have been in talks with us.

For those that don't know you can find out more on why we pull the balsam here https://www.plantlife.org.uk/uk/discover-wild-plants-nature/plant-fungi-species/himalayan-balsam

Lots of info so bear with me and I will try to catch it all.

Initially we have been asked to help at Petersham Lodge woods area here https://www.richmond.gov.uk/services/parks_and_open_spaces/find_a_park/petersham_lodge_woods

Depending how many we have attend and how well we do and considering social distancing etc then if we can please also start to tackle Queen Elizabeth Field too! This is up from the Lodge woods but only slightly. It is the area we start on every year and is found just along from the entrance to the scouts in Petersham along the river.

Please leave what you pull in minimal piles landside. So higher piles of less stacks of balsam is the guide and to the back of landside area away from the river edge (out of sight as poss) is best.

Please note how many stacks you do make and rough height so we can feedback to the council.

Marieke signed up to a mission • Garden help for Ms M

Cultivate London is a charity which repurposes underused space in West London, turning it into community nurseries and training young people in horticulture.

They have asked for a hand with various jobs, this week at their Acton site, and the week after in Isleworth.

If you have your own gloves please do bring them, along with sanitiser.

Tree and overgrown land maintenance for The William Hobbayne Charity

The William Hobbayne Charity need help for an hour in this evening to help maintain land near the canal where new trees were planted a few years ago.

We'll be meeting at 6pm outside the William Hobbayne Charity to grab tools and walk down to the canal.

What do you need to take part?

This is a great opportunity to help a charity that does so much in our local community, plus you'll be outside and making a difference with a group of awesome people!

Marieke signed up to a party
Party

We've booked some socially distanced outdoor tables at The Forester

We've booked 3 tables of 6 and everyone must stay in their table group (them be the rules right now!)

The tables are all outside so bring some layers, they should be undercover fingers crossed with heaters but not guaranteed!

Balsam.... and so it begins

We meet at different sites around the borough not necessarily at the site address.

We've booked some socially distanced outdoor tables at The Forester