12 runners ran have an amazing time in Swindon. 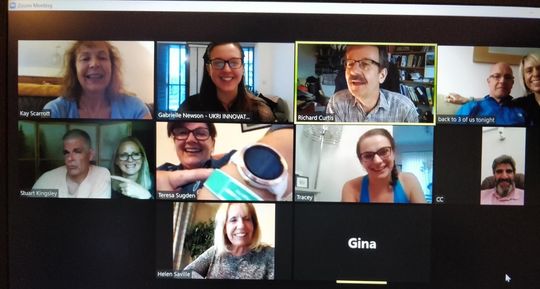 It has been another week in lockdown, so it was time for another quiz. This week we tested Swindon GoodGym'ers brain cells on useless trivia, and also a 'guess the missing landmark' picture round. Questions raised from the most popular colour of toilet paper in France, where you would end up if you dug a hole through the centre of the Earth, and which European country has 158 versus in its national anthem!

There was also an accidental answer give away on the Rembrandt's The Night Watch being called The Day Watch after being over-restored - whoops! Extra point all round, plus our very own medical marvel proved with first hand evidence that you can in fact sneeze in your sleep!

A lack of scoring through traditional methods (i.e. getting the answer right!) meant bonus points were awarded for creative and funny answers. The quiz approved a little harder than intended, even with the added clue that three of the answers were faeces related (which I promise was also unplanned)!

Then it was onto the picture round, guessing the landmark that had been photo shopped out of the picture. It's been a while since we've been able to travel anywhere, and it showed! A couple of pictures were made easier with clues such as red buses and camels in a desert, but others proved a bit harder…

Scores were laughably low all round, but fun was had so we didn’t mind. Tracy was the deserved winner, as she was the only GoodGym'er to reach a score in the double figures!

Next week quizmaster Luke will be utilising his home schooling and new reading to put as all to the test. Check it out here!

A great quiz Gaby! Thank you for organising 😊