3 runners ran on a training session in Greenwich. 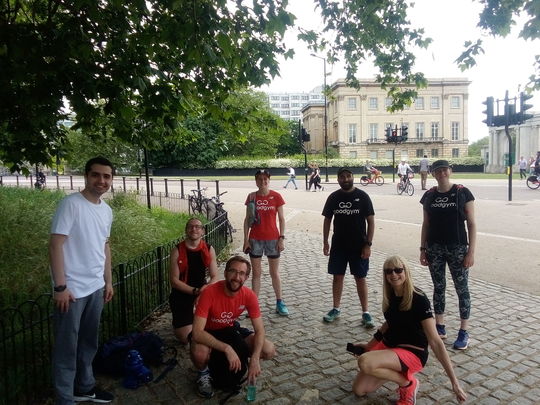 Last week, I learned a valuable lesson. And a very valuable one at that.

Now some may say it was a lesson I should have learned a long time ago. About the age of 7 or so. And along with other important life skills like telling the time or tying your shoes.

But then maybe those people - those judgmental of souls - maybe they're not taking the complexity of the issue into account.

Ask yourself this, Dear Reader - ask yourself what would Pope Gregory XIII say? You know, the Pope who brought in the Gregorian calendar? He's the master of the dates. But not like Cupid.

Well, I tell you what he'd say - he'd say - well, he'd probably say something like 'now this is a little strange - what's GoodGym - and have I really been dead for 4 centuries?' But he'd probably also say that getting dates right is bloomin' hard!

And so maybe I should be forgiven. But then maybe I shouldn't. For, and it's shameful to admit, I listed this session on the wrong darned Sunday... harrummpphhh. And if it weren't for one very lovely and eagle-eyed GoodGymer, I wouldn't have noticed one bit.

Nevertheless, GoodGym Greenwich supremo, Jenny, and the brother, Steve, did still join for a very lovely morning jaunt around the parks on the 20th. And for those who had signed up, but couldn't make the actual date, please do forgive me! I will bring chocolate next time (4 July, honest, I even double-checked this time) as atonement....

Looking forward to it,