If we discovered who Luke's father was then did we sing happy birthday to Princess Leia?!

9 runners ran have an amazing time in Swindon. 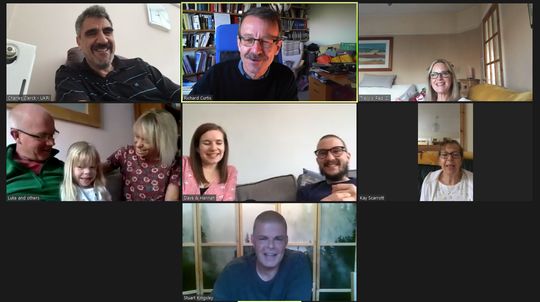 Out of 30 questions, plus a bonus Stuart, missed a clean sweep by failing to know who wrote the 1899 novel "Heart of Darkness" but then did anyone know the answer was Joseph Conrad. I'd only hear of the film but didn't know there were multiple films based on the novel! Is 30/31 the record for one of our quizzes?

Don't be put off joining us next week as Stuart is guaranteed not to win as he's volunteered to be quiz master.

Some of us discovered that Glengarry, although sounding like a rather good single malt scotch would not go down well as it's a Scots cap. Perhaps best to keep to the most consumed manufactured drink in the world, tea. At least we all knew Ethylene Glycol was antifreeze rather than a wine additive, if anyone is old enough to get that reference.

We finished, as we started, reflecting on what we were doing for holidays this summer. A few days in Torquay if the weather is good for some. A trip to Manchester by canal for the quiz master but the trip we all wanted to go on was a trip to Alton Towers. Some would look forward to the rides, some wouldn’t be put off by our GoodGym weeding missions but would look forward to the gardens.

But what we are all looking forward to is celebrating our birthday in August. We may only get together for a socially distanced ice cream in Lydiard Park (other Parks are available) but it’s the company that matters and we’ll all have a good socially distanced natter and look forward to bigger celebrations in the future.

We all sang Princess Leia happy birthday and hope she has a wonderful birthday!