2 GoodGymers made their way 5.5km to help the Barnsley Churches Drop-In Project in Barnsley. 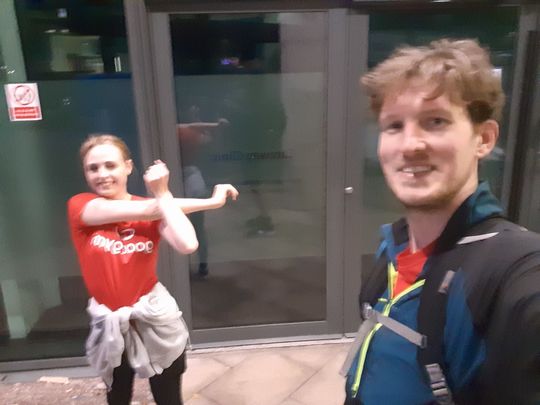 The group run this evening was to the BCDP to aid Peter and his team with their efforts to assist the homeless in Barnsley. We started off with a quick count up to make sure we didn't lose anybody during the course of the evening, and headed off for the short-but-sweet run to the drop-in project on the other side of the roundabout.

When we arrived, there was already quite a gathering outside as usual, though we managed to do some queue jumping and gain early access through the guarded hatchway.

When inside, we had a few jobs lined up for us alongside the other volunteers at the centre. Mainly taking orders and handing out the requested items to the door staff. We were taking orders from the front of house staff and filling up the pre-packed bags with extra bonus items shouted through. This involved a choice of pasty. The pasties had to be picked with the aid of a pasty key. Each one had a different pattern on top to distinguish it from the others. For example dotted line for steak, wavy lines for cheese and onion etc. People could also request an Italian, we played pass the pasta, or pizza, accordingly. We also had to keep cups of tea or hot chocolate poured in batches of 4 ready to be handed out. Thermal flasks of these were made by classy kitchen aid Kirsty, ready to top up the next batch of cups, keeping the supply ready to choc and roll!

Wake me up before you cocoa

We were also making up the bags to be handed out at the door in future. This involved putting two juice boxes, a bag of biscuits (made up by a fellow volunteer at the centre. She was super keen on joining GoodGym but is a couple of years too young, definitely a future recruit though) and a chocolate bar. We put 6 completed bags in a large crate and stacked it up ready for future use.

A bag in the hand is worth two in the bush

After a solid hour busily working away, we said our goodbyes to the other volunteers and went on our way to do some fitness. Tonight's exercise activity was a short, steep Strava segment up Fitzwilliam Rd. We did a practice run first to test the water, then did a full power run. Everyone pushed themselves hard to the top, super effort!

After this, we did a short jog over to our meeting location and used the wall and steps to stretch off.