10 runners ran have an amazing time in Swindon. 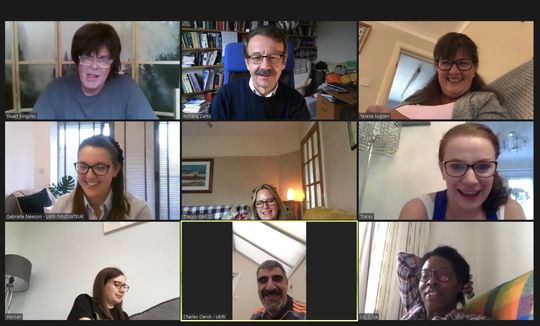 In a change to the usual format, instead of a quiz night we had a Bingo Night hosted by Stuart. Actually, it wasn’t Stuart but his alter-ego Tarquin Flange who hosted the evening with his dark brown wig on.

Unfortunately Tarquin isn’t very experienced with Bingo calling, so he made it up as went along. Numbers such as : ‘Kelly’s Eye - number Three’ and ‘Open the bathroom window – number two’ were a couple of examples.

Charles appeared in his new guise, with haircut and beard trim. No long the mountain man, more bank robber.

The numbers came thick and fast, and a third of the way through Teresa was in the lead and Tracey C was in last place.

It got more and more exciting towards the finish, and we checked to see how many numbers were needed to win.

Then we had two or three people needing just one number. Boom – it happened. From last place to being the winner – Tracey C.

Apparently the first thing she’s ever won too. Forever to be known as The *GoodGym Swindon Bingo Champion 2020. *Well done Tracey!

Next Week our Bingo Champ Tracey (or should I say Fluffy) will be hosting – don’t know what yet – it’s a surprise!

What a pity I missed this; I love the wig Stuart - it suits you 😆 !

Clearing the Traverser at STEAM!