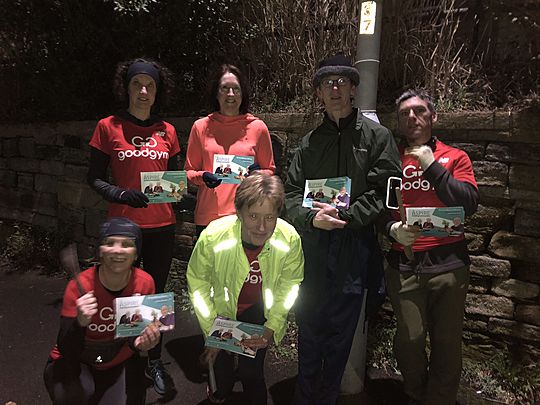 Such were the cold temperatures last night there was not too much perspiring going on, although thats not to say GoodGym were not running (and working) hard!

Aspire Creating Communities are local organisation who provide community based sessions for older people, and last night they had 300 leaflets which needed delivering around Almondbury to promote the regular sessions in the area. Fortunately they had heard of GoodGym Huddersfield’s reputation as expert leafletters and had commissioned us to get the job done.

A record 2020 attendance of 7 GoodGymmers made the run up Somerset Road to Almondbury. And it really was a run up to Almondbury, 3K a fair chunk of which was climbing so it was good to see some determination from various GoodGymmers to get to the top without stopping. Nice also to see Meg Deacon and Louise Galvin back with the group after a few weeks away, and they joined Kati Law, Ben Godfrey, Wendy Redmile, Richard Byrne and myself to make up our super seven.

At the top of the hill I was glad to get the heavy stack of flyers out of my rucksack and distributed fairly evenly amongst the GoodGym crew. Fortunately Luke from Apsire had given us a very clear plan of where the streets where leaflets needed posting, which makes the job much easier. We soon fell into our steady, well drilled rhythm of running and posting, ensuring every house on the list received a leaflet.

A slightly lost pizza delivery man provided a distraction, but as he couldn’t be persuaded to a) deliver any leaflets for us or b) give us any pizza we continued on our way. Fairfield Road, Ings Road, Southfield Road and Delacy Avenue, we were rattling through our list of locations and also keeping warm on what, under clear skies was becoming an increasingly cold evening.

And before we knew it we were done, all the destinations delivered to with a few minutes and leaflets to spare, so we took the opportunity to swiftly post those through a few additional doors. Hopefully now the people of Almondbury are more aware of Aspire Creating Community’s Activity groups.

All that was left was the welcome run back down the hill to reach the Stadium with tired legs and that positive feeling of another good job done. Well done to last night’s GoodGymmers, I salute you all!